They Call Me Bruce

EVERY NOW AND THEN, I get recognized on the street.

Here’s an example of a recent encounter:

Stranger: Excuse me, but are you on Hawaii Five-O?
Me: No, I’m not Daniel Dae Kim.
Stranger: No, the other one.
Me: No, ma’am, I am not Grace Park.

As Asian Americans, many of us can identify with being mistaken for other Asians. The whole “all Asians look alike” stereotype is one I believe many Americans secretly hold on to. Does it bother me? Not really. Let me tell you why …

Many years ago, a tattered, dreadlocked man approached me as I was walking out of a Hollywood bar with friends late one night.

Stranger: Man, I just had to tell you. You look like Bruce Lee!

While it’s true that I exude a certain charm and charisma and can kill a man with my bare hands, I don’t claim to look anything like Bruce Lee. I took offense. How unoriginal can you get? Bruce Lee? I grew up with that taunt. Update your racism, vagrant! Tipsy from a night of drinking, I decided to mess with the guy.

Me: Yeah, I look like him because I’m related to him. In fact, I’m Bruce Lee’s son. And he taught me everything he knows.

As I improvised some karate moves, my friends struggled to suppress their laughter. But the man stood there. Frozen. Eyes glazed over. He could barely speak.

Stranger: Are you serious? You’re his son? Oh, my God. You gotta come with me. Please.

The stranger ushered me down the block. Though weirded out, I felt compelled to follow him. My antics had somehow touched a nerve. I told my friends to wait for me and followed the man into an alley. There, under a dim lamp, was a run-down station wagon. I started to second-guess my decision to follow him.

Me: You know what, I should really get back to my friends—

Suddenly, three tiny sleepy-eyed faces popped up from the backseat. They looked just like him. They were his children. And they all lived in this car.

Stranger: My kids are the biggest Bruce Lee fans in the world! It means so much to me for them to meet you.

The kids were beaming. Like their dad, they were star-struck. They started asking me questions about my “father” and his movies. One even asked about my “brother” Brandon. They were clearly fans. I felt like an asshole.

But I couldn’t turn back. I told them what little I actually knew of the man. I started to backtrack, explaining that I wasn’t really that close to him because he was always “so busy.” I didn’t even go to his funeral. Brandon was only a half-brother. I was an illegitimate child from another relationship. Lies, lies, lies …

The whole time I was thinking that if anybody had a great father, it was these kids. He probably knew I was a phony but didn’t care. He just wanted to make his kids happy. He wanted to inspire them, if only for a moment.

There was a time when being mistaken for another Asian person might have offended me. But the intentions are not always rooted in racism. Sometimes, people just want to make a connection. And come to think of it, being mistaken for Bruce Lee, Daniel Dae Kim or Grace Park isn’t so bad. They’re all extremely talented and super good-looking.

On the other hand, if you mistake me for, say, William Hung, then you’re a racist. And I may have to kill you with my bare hands.

This article appeared in the August 2011 issue of KoreAm. 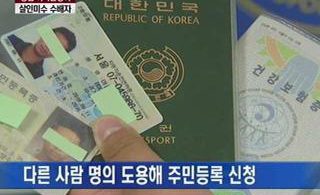 A Korean American former gang member who fled to Korea to avoid being tried for attempted murder in Los Angeles was arrested today for forged documents, according to Yonhap […]