Class is in session for SyFy’s upcoming television pilot adaptation of the graphic novel “Deadly Class,” with Benedict Wong and Lana Condor set to star.

According to the Hollywood Reporter, the pilot has been described as an action-packed coming-of-age centered on Marcus, a diamond in the rough left to fend for himself on the mean streets of San Francisco in the 1980s. Marcus is recruited into a special high school designed to raise ruthless assassins, but he struggles to keep his moral compass amid the rigorous curriculum and his cutthroat classmates.

Wong will play Master Lin, the assassin school’s fear-inducing headmaster. Wong was last seen in Marvel’s “Doctor Strange,” a role that he will reprise in the newest upcoming “Avengers” film. He has also had roles in “The Martian,” “Black Mirror” and had a starring role as Kublai Khan in Netflix’s “Marco Polo.”

Condor will play Saya, described as “mysterious” and “guarded.” Saya is on a mission to redeem herself after being exiled from a Yakuza clan and will stop at nothing to nab the valedictorian spot.

Earlier this year, Condor garnered attention after news broke that she landed the lead role in the upcoming film adaptation of Jenny Han’s book “To All the Boys I’ve Loved Before.” Condor has also starred in “X-Men: Apocalypse” and “High School Lover.”

“Captain America” producers, the Russo Brothers, are executive producing the project, which currently has no release date attached. 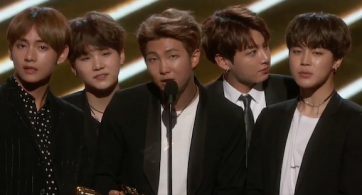 The boys of South Korean music group BTS are all set to perform on “Jimmy Kimmel Live!” Although no recording date has been set, Billboard reported that the group […]