Kim Jong-eun, the successor to North Korea’s leader, Kim Jong-il, is going to have a sad birthday this year.

According to Open Radio for North Korea, a radio station that broadcasts news into the North, a cargo train holding gifts to celebrate Kim Jong-eun’s birthday was derailed on the way from Sinuiju to Pyongyang. A North Korean official told the radio station that he believed the derailment was due to sabotage, most likely by opponents of the regime change.

“The railways here are outdated. But the tracks looked so badly damaged that it appeared they had been tampered with before the train was about to pass.”

Kim Jong-eun, who is the youngest son of Kim Jong-il, is around the age of 28, and his birthday is speculated to be on January 8th, which sources have said has been declared a national holiday in Korea.

We take back what we said earlier – even without a trainload of gifts, Kim Jong-eun is probably going to still have a much, much better birthday than everyone else in his country. 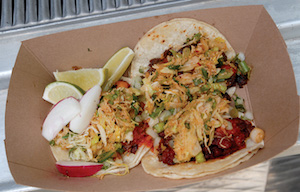 Photo by Eric Sueyoshi It’s no big surprise to us, but it’s still kind of cool that “Korean tacos” were listed as one of the “The Coolest Food Trends […]