Somewhere in the early Los Angeles morning, a cell phone vibrates—on the other end is 13-year-old Korean Filipina actress and singer Ella Jay Basco, calling from overseas in the United Kingdom. The time in London is 4:30 p.m., and the breakout star has spent all day answering interview questions about her upcoming role in the eagerly anticipated action flick, “Birds of Prey (and the Fantabulous Emancipation of One Harley Quinn).”

Until now, there’s never been someone who looks and acts like Basco in such a large-scale action film. With so many predominantly white superheroes present in film, Asian Americans can rifle through a select list of about five actors to look up to. Before landing the starring role of Cassandra Cain, Basco had worked on some of TV’s most well-known shows, including “Grey’s Anatomy” and “Veep,” both of which present refreshingly diverse portrayals of female characters.

“Birds of Prey” has turned out to be no exception for Basco. The superhero movie skirts the stereotypes that are so often present in action and comic book films, focusing instead on an almost all-female ensemble cast. Basco plays tween petty thief Cassandra Cain, an orphan who one day picks her way into the wrong pocket and has to join up with the leading ladies of Gotham to survive. The film follows these five women, who seemingly have nothing in common besides geography, as they come together to defy the odds and take down the dangerous criminal hunting Cassandra.

But how, exactly, did our rising star go from television and commercials to a feature film? When her manager and agent sent her into the “Birds” audition, no one knew exactly what the role was for. “We didn’t know that it was ‘Birds of Prey’ or that it included Harley Quinn,” Basco says. Instead, she and her team went into the audition with an open mind, and ventured on throughout the months-long audition process, which started when Basco was just 12 years old. “I did some chemistry reads with Margot [Robbie], and I did some chemistry reads with Jurnee [Smollett-Bell],” Basco says. The chemistry reads were practice performances, allowing the cast and crew to feel out the distinct and individual treatment of each character. “What was interesting was that I didn’t even know that it was for Cassandra Cain.”

With the chemistry reads behind them, Gotham’s little birds, played by Robbie, Mary Elizabeth Winstead, Smollett-Bell and Rosie Perez, all helped encourage Basco. They became her on-set sisters, ushering her into the team.

Though she’s been exposed to progressive, feminist concepts from a young age, Basco says she’d never before worked with a cast and crew so ready to support and push the concept of a female-driven action film. “Throughout my career there’s been little bits of representation,” she says. “But it was super refreshing to see all these women support each other. Nobody had an ego, everybody was so welcoming and supportive of each other.” As someone so young, to have already had experiences working with eccentric and experimental directors has matured Basco’s own perspective on the industry.

Basco pushed herself to be more like the successful women she shared a set with, allowing herself to get inspired to work hard with director Cathy Yan and the crew to create her character. “I definitely think we honored Cassandra Cain in the comics a lot,” Basco says. “It was a very open conversation that I had with Cathy about figuring out how to put Cassandra into the DC Universe and into film.”

However, Cain is already an under-represented character in the DC Universe, so Basco explains that they had to start pretty much from scratch. “There weren’t many other things in films with Cassandra Cain, I haven’t heard of any at all,” she says. “So we really based her off this vulnerable, scrappy kid, like Natalie Portman in ‘Leon the Professional.’”

The oft-mentioned Stockholm Syndrome trope, prevalent throughout Harley Quinn’s universe, changes as it’s passed along to Basco’s generation. This gave Basco the freedom to play with the treatment of Cassandra and allowed her to bring onto set some of her real self—a charismatic actress and musician, whose song “Grow Up Kid” discusses themes of the stresses involved with being young. These same themes often limit Cassandra in “Birds of Prey,” but they also give her a leg up in Gotham, where she’s seen as an integral part of the team despite her young age. Like Basco getting to experience her first defining moments on screen, this is Cassandra’s origin story.

According to Basco, Yan encouraged the cast to pull from these personal insights into their characters, “She was open about how I wanted to portray Cassandra Cain and what the relationship might be. And yeah, she had all these great ideas, and we did a bunch of improv too, which was great!” Basco says, voice bright. Early improvisations and those aforementioned chemistry readings led to one of Basco’s favorite moments in the film. She describes a central scene, where Cassandra and Harley eat cereal on a small couch in Harley’s messy apartment, watching cartoons while a pet hyena hangs out beside them (via CGI, of course). “It was so funny, Margot and I bought each other hats,” Basco says. “We ate cereal all day, and we really got to know each other.”

Looking back at the filming process, Basco reflects on how her first big feature role has become a defining moment for her. “It’s changed my life, and I’ve grown so much from this film specifically. I’m grateful for Margot and Cathy accepting me on this journey,” Basco says.

Like Cassandra, who uses her pickpocketing skills to survive in the big bad city, Basco uses her talents as a mixed ethnicity actress to code switch into different roles, maneuvering through the huge gears of Hollywood. She doesn’t allow her background or roots to defy her, but instead dives into her heritage to become a stronger female representative of the mixed nationalities that make up the theatrical industry.

Basco voices her perspective on the matter frequently and is a major proponent for the growing inclusion of Asian Americans on the big screen. Even before “Birds of Prey,” she was never shy about voicing her opinion on inclusion in the acting community. She often uses her social media platforms to write about her Asian American heritage, encouraging her followers to break down barriers and antiquated ideas of who should and who shouldn’t be seen on the big screen. “It’s super important to have all of our stories shared in the industry,” Basco says. “Representation is important because we all deserve to be heard. I definitely think it’s improving because of Cathy and all the women being part of this whole movement. And hopefully [‘Birds of Prey’] will launch more female action movies, and make this a norm.” Although Cassandra Cain and Ella Jay Basco may seem worlds apart, they’re both signals and symptoms of the changing times. 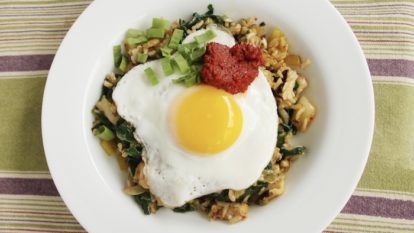 Are you constantly wondering what to eat next? Are you curious about keeping up with food trends? Are you trying to eat healthy, go vegan or just purely get […]