Stephanie Hsu had finally made it to Broadway. Years of toiling through casting calls and auditions and parts in Off-Broadway theaters had finally landed her a role on the Great White Way, in one of the most anticipated productions of our time: “The SpongeBob Musical.” That’s right, when it opened in 2017, Hsu played opposite Mr. SquarePants himself, as Karen the Computer.

Having found success in New York, Hsu thought it might be the time to make the move to Los Angeles for more work in film and television. But then she got an opportunity she couldn’t refuse: the musical “Be More Chill,” in which she starred when it played Off-Broadway, was moving addresses.

“Now we’re going to Broadway!” said Hsu. “So, you know, it seems like New York isn’t quite ready to let me out of her sight yet, and I am totally OK with that!”

Hsu’s journey into musical theater was unintentional. Her background is in comedy, and prior to her Broadway break, she was trying to forge a career on the small and big screens. In 2013 she appeared on “MTV’s Girl Code” (which also featured Awkwafina), as well as “The Path” on Hulu. She’s also done a handful of commercials (you might have seen her sweaty armpits under a restroom hand dryer for Secret deodorant).

As a young girl, Hsu never thought she would become an actress. She grew up in Los Angeles with a single mother from Taiwan who was adamant that her daughter could never go into the arts because no one on stage or screen looked like her. Yet throughout her youth, there were signs that she was meant to be a performer. In lieu of essays, she turned in video projects during middle school. In high school she gave acting a try and accomplished the rare feat of landing a spot in the senior play, as a freshman. In her senior year she was voted class clown. When it was time to pick a college, she was fully committed: She attended New York University’s Tisch School of the Arts.

In her first year of acting school, Lucy Liu spoke at one of her classes. It was an emotional moment for Hsu. “I started to cry just because I realized that one of the only people I had to use as an example to show that a life in the performing arts as an Asian American was possible was right in front of me,” she said.

Now Hsu could be an inspiration for that young would-be Asian American theater geek coming to Broadway to see Be More Chill, which opened in February at the Lyceum Theater. It’s based on a young adult novel about a high schooler named Jeremy who takes a pill to become popular. Hsu reprises the role of Christine, Jeremy’s love interest. It’s a character she imbues with weirdness. “[When] you’re in high school, normative feels a lot easier, but actually there’s so much to celebrate in all of our idiosyncrasies,” she said with a laugh. “I hope, with the role of Christine, that is something that people can walk away with in their pockets or in their weird little hearts.”

For Hsu, it is an honor to be able to “carry the torch” and create space for Asian Americans in theater. She noted that, while Asian American representation in TV and film has boomed, it hasn’t been the case for Broadway. “The most Asians you ever see on stage are in ‘Miss Saigon’ or things of that nature,” she said. “It’s still a great opportunity, but the stories that we’re telling are not new and updated.”

Hsu believes Broadway is one of the most important art forms because local, community and high school theaters end up performing these shows, as well. For that reason, Hsu said, it’s important that the stories being told are for everyone and challenging audiences to create the kind of worlds they want to live in.

“There is a kid in middle America who may not feel safe to be truly who he is, or come out as gay,” Hsu said. “But then they get to do ‘Be More Chill’ in their high school, and everything inside it is about being true to who you are. It’s intentionally wild and weird and wacky and totally queer positive. So maybe in telling that story or getting to do that show, he is given access and permission to step into himself even more.” 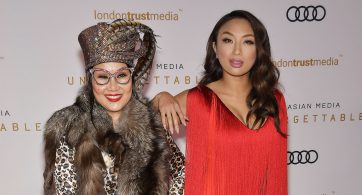 Jeannie Mai, a confident, bubbly talk show host, is one of the most popular personalities on daytime television. You may know her as the stylist from “How Do I […]