In the bird world, Kevin Lee would be a peacock. Clothed in designer jeans, a pinstripe blazer and a polka dot scarf, he accessorizes perfectly with pointy loafers and designer eyeglasses. Each lock of hair is precisely sprayed into place.

Lee is all about style, and so is his profession. His floral event production company, LA Premier, has been in business for more than 20 years. A pioneer in the industry, he’s known for creating stunning and elegant displays. Potentially tacky elements — ceiling-high tree branches adorned with white “snow,” crystals and chunks of fake ice — are transformed into opulent and tasteful designs.

The go-to floral designer of the stars, Lee created the looks for major celebrity weddings, including those of Brad Pitt and Jennifer Aniston, Drew Barrymore and Christina Aguilera.

“What Brad liked and what Jen liked was totally different,” Lee says. “He was more Zen and more modern, and Jennifer liked a sweeter and prettier and more feminine [look]. It was a challenge merging the two, but it came out really beautiful and fantastic, and it was fabulous.”

More than 50,000 flowers — a mix of rambling roses, wisteria and lotus flowers — decorated the affair held at producer Marcy Carsey’s mansion. There was also a floral-studded canopy. “It was very romantic and elegant,” Lee recalls.

Today, Lee is working in his Beverly Hills shop. He greets clients and talks with designers, constantly moving through the 4,000-square-foot space. A 10-foot tall arrangement in the lobby cascades from the ceiling, and behind closed drapes, half-finished arrangements fill the room.

“Hi darling,” he says to Ellie, a regular client. “What, are you pregnant again?” Ellie is planning an anniversary dinner for her nonprofit group, and fussing with centerpieces. And Ellie isn’t pregnant; she’s just, uh, curvy.

“Omigod, I love feathers,” he says. “But no leaves — green is too dark. Why are you stressing yourself out over this? Let me make it look good.”

Lee puts Ellie at ease, which might explain why she’s been coming to him for 10 years. He has a knack for winning the trust of his clients. Last summer, Wolfgang Puck flew Lee to Capri, Italy, to plan and design his wedding.

“We had to create three different designs for three events,” Lee says. “It was grand. He got married on July 7, 2007. Seven-seven-oh-seven — a lot of people got married at that time because it’s lucky. I got lucky that year, too.”

At each of his events, Lee is the designer and in charge of the overall vision. He ensures the theme is articulated through lighting, design, linens, flower arrangements and table settings. He also coordinates with vendors and oversees every last detail.

Many arrangements need to be created the same day, and there are many logistical nightmares.

“People are trying to set up restrooms, valet and coat check, and it’s not working, or vendors arrive five hours late,” he says. “Or a party starts at 8 p.m. but people arrive at 7, or catering begins at 9 p.m., but people start asking for food at 8, and the client is screaming at us like it’s our fault.”

Installing arrangements is a battle of its own. Electrical lifts are used to hoist 10-foot tall arrangements onto tables. He once covered a 30-foot tall ceiling with crystal strands and made poodles sculptures out of flowers. (People have asked him to make arrangements resembling sports figures, but he had to draw the line there.)

“You have to consider a lot of things for a fabulous party,” he says. “I educate the clients at the same time. And I get paid for it, everything — planner, coordinator, plus design and style. I am the first one to charge for styling, to charge for my talents.

Lee doesn’t personally take on every project and sometimes delegates certain events to one of his “girls.” “I don’t deal with low end,” he says.

Lee is often described as the real-life version of Franck Eggelhoffer, the eccentric wedding planner in the 1991 version of “Father of the Bride.” Martin Short, who played the character, had his own talk show after the movie, and invited Lee as a guest. He taught Short how to arrange flowers on the show.

“Kevin is really animated and dynamic, and super creative — one of the most talented, artistic people I’ve ever met,” says Andrew Krasny, a producer for the short-lived “Martin Short Show.” “He takes whatever budget you have and makes you look like a billion dollars.”

Krasny and Lee have become close friends in the past eight years. One thing he’s learned: Lee is brutally honest.

“When he goes into anybody’s house, he will completely rearrange it,” Krasny says. “If he meets a pair of sisters, he’ll go to one sister, ‘You’re so beautiful!’ Then he’ll turn to the other and say, ‘Aw. You’re not as pretty.’”

Though his public persona is flamboyant and extravagant, under the veneer, Lee is an extremely loyal and faithful friend, says Krasny.

“Kevin is very generous and giving,” he says. “When I first met him, he invited me to a dinner party for his birthday. Our birthdays are just a few days apart. First, they brought him a birthday cake, then they brought out a cake for me, too.”

Lee is considered a design mogul now, schooled in how to combine foliage and other elements to create the perfect style for celebrity brides. But when Lee was growing up, weddings and floral design were not as sophisticated. Back then, he was actually encouraged by his parents to become a musician. He played the clarinet and attended a fine arts school in Seoul. When Lee turned 24, he moved to Los Angeles and worked for Teleflora as a company designer. Six years later, he opened his own shop on the west side of Los Angeles. It was a tiny store that didn’t make much profit.

“In the beginning, it was a part-time job, something to do,” Lee says. “Then I really began to see it as a business.”

After many years of hard work, Lee evolved and matured, and people began to notice his talent. His career skyrocketed in the last decade. In addition to his production company, he also owns a line of wedding and party accessories, which he sells across Asia. He is also the key wedding designer for the Samsung-owned Shilla Hotel in Seoul. His autobiography comes out this year, and will be published in Korean. The title is roughly translated as Going Out in Style.

During any given week, he’s working on three to four events with his staff of 35 employees. His biggest project right now is this month’s Grammy Awards. Last year’s look was a modern Chinese nightclub, and this year will have an Old World Renaissance theme. His company is doing the flowers for Oscar events, but the writer’s strike cost him several Golden Globe parties. Weddings, however, are his big moneymakers.

“You think a vase, cut flowers … what’s the big deal?” he says. “Well, this arrangement is not just for your home — thousands of people are going to be looking at it. You have to evoke the same feeling.”

Lee is good-humored outside of work, but on the job, he is intense and precise. The client always comes first, and he won’t spare your feelings if it compromises the event.

“We’ll rip an entire arrangement apart to restructure it, even though it took the designer three to fours hours to create it. Sometimes a client will bring in materials, and he says, ‘Oh, that’s fabulous,’ and grabs it, and it turns into something totally different in a couple hours. It’s a work in process. It’s always changing.”

Before the event, Lee makes samples for clients, and finds out why they’re throwing the event, and what’s important.

“I enhance their ideas, and I enhance their dreams,” he says. “And I work with their budget. Flowers are always the last touch. And they can make or kill the party.”

Flowers may seem frivolous to some, but he takes the business very seriously. To him, flowers aren’t just decoration. It’s a tool to create breathtaking designs on a grand scale.

“I really enjoy what I do,” he says. “I love creating something, and my creative juices come out. I see what I like to see. I change, I put it back, I create all the elements, and I look at everything as a production person, and as a guest. Am I going to be excited? Or will I be bored with this party?”

In his free time, Lee watches movies and reads. He’s interested in architecture, and his own house in Century City is “to die for,” according to friends.

Lee’s parents now live in Los Angeles and are very supportive of his career.

“When you focus on something, and you do what you like, there’s a lot of money that can be earned,” Lee says. “You have to enjoy what you do. Life goes fast … so have no regrets.”

Lee is good at what he does, and he’s not afraid to flaunt it. His personal cell phone rings every other minute, with Keanu Reeves or Eddie Murphy wanting him to personally design their next party. He’s earned the right

to strut his feathers. 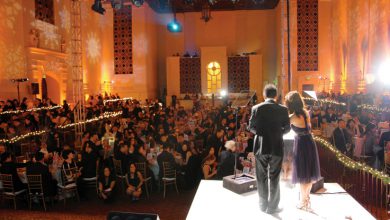 By Michelle Woo Photographs by Chiuling Chen, Erik Ginn, Eric Sueyoshi and Ho J. Yun It was beginning to look a lot like a star-studded Christmas at KoreAm Journal’s sixth […]