Even if you’re not a die hard K-pop fan, chances are that you’ve already heard buzz about the upcoming KCON L.A. 2019. From August 15-18, the Staples Center will be full of all things Hallyu. KCON is the largest convention of its kind, providing a massive venue for fans to connect with one another, as well as with Korean entertainers and professionals.

Last week, the organizers of KCON announced five new groups that will join ONEUS, Stray Kids and more on the lineup in a couple of months. Until August rolls around, take a look at the new additions who will play the convention:

The five-member boy band celebrated their 7th anniversary this year with a new album, “Happily Ever After.” Recently, they sold out Korea’s KSPO Dome for three nights of performances, so there will definitely be major crowds flocking to see their KCON set.

Although this group is relatively new on the K-pop scene, its members are industry veterans who hail from bands like MXM and Wanna One. Their name is an abbreviation for “absolute 6” or “above brand new 6,” describing the “absolute perfection” they’ll achieve with their music.

Another new band on the block is girl group Everglow. They dropped their debut album “Arrival of Everglow” in March of this year. The track “Bon Bon Chocolat” topped the K-pop iTunes charts of 19 countries worldwide, and also earned the sixth highest chart position on Billboard’s rankings of girl-group debut singles.

Before their January debut, VERIVERY starred in their own reality TV show, “NOW VERIVERY: Real Road Movie,” which premiered on Mnet last September. VRVR has since released two EPs and their track “Ring Ring Ring” has amassed over 3 million views on YouTube.

This 12-member girl group is composed of both J and K-pop stars. Formed through the Mnet reality competition show “Produce 48,” the group officially debuted last October and dropped their brand-new single “Buenos Aires” less than two weeks ago.

You can get more information and passes to KCON L.A. here. 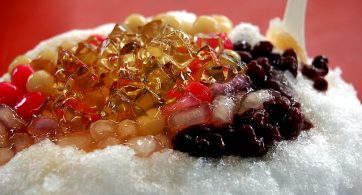 As the temperatures ramp up, you might be daydreaming about a big scoop of vanilla or chocolate ice cream to help you cool off. Hey—there’s a reason July is […]