As the temperatures ramp up, you might be daydreaming about a big scoop of vanilla or chocolate ice cream to help you cool off. Hey—there’s a reason July is National Ice Cream Month. But if you want to try something new this summer, take a look at these frozen desserts from our neighbors across the Pacific. These ices might not be the same Dairy Queen cones you ate growing up, but they’re sure to curb your craving for something cold and sweet on these hot days.

Although originally from Malaysia, this icy dessert is popular across southeast Asia. It’s sweetened with coconut milk and molasses-like palm sugar syrup, with gooey green strings of pandan-flavored rice jelly added on top. Other toppings include red beans, jackfruit and slices of durian.

Vietnam’s banana ice cream is a homemade staple of the country’s steamy tropical summers. A sweet-and-savory mixture of coconut milk, bananas and peanuts are frozen in tupperware or even just a plastic bag, making it one of the easiest cold treats that you can whip up at home.

The words “shaved ice” might conjure up mental images of the rock-solid snow cones we sucked on in elementary school, but Korean patbingsu is a much more delicate treat. Creamy, finely-cut ice forms the base of this dessert, and pretty much any sweet food imaginable, from red bean paste to chocolate to syrupy canned fruit, is balanced on top.

Taiwan has its own take on classic shaved ice. Though it’s often piled high with the same toppings as patbingsu, the ice base is cut into wafer-thin, flakey sheets and then doused with brown sugar syrup or sweet condensed milk. And unlike the snow cones of your youth, it (probably) won’t turn your tongue purple, either.

Translated literally halo-halo means “mix-mix,” and it certainly lives up to its name. Originally a simple combination of red beans, ice and milk, present-day iterations include toppings like jackfruit, flan  and agar-agar jellies. And don’t forget to add the essential bright purple scoop of ube.

Dating all the way back to India’s 16th century Akbar reign, this dessert is made by boiling down sweetened milk that’s traditionally flavored with saffron or pistachio. It’s then frozen and served either in a small earthenware cup, or in a popsicle shape on a stick for a treat you can bring to the beach.

Often referred to simply as ABC, ais kacang is a popular summer dessert hawked by street vendors across Malaysia, and we can see why. It’s a simple blend of ice and toppings like red bean, sweetened by rose water, syrups and you guessed it—a generous helping of condensed milk. 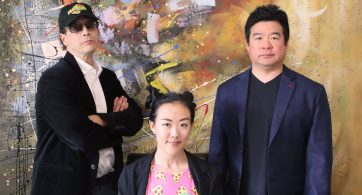 Join the debate on movies, TV and American culture with “The MacGuffin Report,” a new player in the growing community of podcasts hosted by Asian Americans. Each episode of […]