Not many filmmakers are former drug dealers. Fewer still look like Angie Wang.

The daringly personal feature is based on the filmmaker’s life, in which the lead character, a chemistry student (played by Annie Q.), becomes the biggest distributor of recreational drug ecstasy on the West Coast in the 80s. The protagonist, a Jersey girl, is a proverbial fish out of water among the predominantly white, well-heeled student population.

Originally from New York, Wang moved to San Francisco with her sights set on making her mark in the tech world. Although the Rutgers alum considers herself a New Yorker, she now calls Los Angeles home, where she resides with her family.

What was it like the first day on set?

The first day on set is fantastic. It’s very magical, I have to say. Making a movie is a lot like having a child. So, it’s just as painful — almost.

The first day on set is a pretty joyous and surreal moment. The first scene we shot was Christmas with Tommy and Angie, so you know, we’re on location, and then when we wrapped that first day, I was like, ‘I kind of feel like I was born to do this.’

It’s funny because I thought there was just gonna be a lot of people who I wanted to cast as Angie and there was not. I read fantastic Asian American actors and I feel like I read every single one up and down the Eastern seaboard and on the West Coast, too. I worked with our casting director, Shana Landsburg. I looked at a lot of audition tapes.

Annie Q. was fantastic. She was actually the first person who ever read for me. I had the realization that she was basically still a kid, then I knew it was Annie. She was so young, and vulnerable. She did a great job.

The rest of the cast really fell into place. We also had a lot of competition for the Jeanine role. It’s a pretty beefy role, and a lot of girls were interested in it. Francesca [Eastwood] just hit it out of the park in that role, and [we were] thrilled that we wound up with Francesca.

Ron Yuan, who played my Dad, he’s one of the only people who I didn’t read. I knew his work. Ron has been directing quite a bit. He’s doing the new “Step Up” movie in China. And he’s up to do “A Private War,” which is gonna be fantastic.

On paper, Jeanine and Angie so different. I felt like they each envied each other, but then we see more of their flaws. It made them more real, and they kind of became more real to each other.

Definitely. I really wanted to make a movie that highlighted the solidarity of the human experience rather than the differences. And Jeanine and Angie on paper couldn’t be more different in so many ways. And I think it’s their process of discovering who the other one is, and along that process understanding that there’s a lot of pain and damage that they both kind of carry, that they wouldn’t necessarily have gleaned in the other one at first glance.

I loved the hair and the wardrobe, it really brings everyone back to the ’80s.

All my actors were like, “What is this sh-t?” And I’m like, “This is actually how we dressed.”

Angie’s character is very badass in how she carries herself, and she’s very unapologetic about it. Was that intentional?

Yeah, it was pretty true-to-life. And I think that in building this character, part of it was me, obviously, part of it was what I put on the paper, which was a little bit different than me, and part of it was through Annie Q. Annie did a beautiful job showing the vulnerability underneath it all, and then throwing it right back up. So, I think a lot of us walk around like that, we walk around with a lot of armor, we don’t want to get hurt, and I think to the extent that we can allow ourselves to be seen, for who we really are, is a very powerful thing.

It was very refreshing.

She’s a complex character. Especially as Asian Americans in cinema, we don’t often get portrayed in authentic ways. Especially an Asian American woman, having all these layers, having this very rich, complex, inner world — authentic. But it’s also a lot less f-cking boring than watching some girl who does nails, or does math problems all day long and eats wonton soup.  F-cking infuriates me.

The film is inspired by true events. How much is true-to-life?

I would say that it’s about 30 years of life experience condensed into a one-year narrative for the sake of powerful storytelling. I would say that everything that happened, happened to me at some point in my life, maybe not necessarily to that person, or in that way.  But what I really thought to do was to write from a really authentic emotional place, and to give an honest voice to the characters.

Is the Tommy character a real person?

The real Tommy is still alive and kicking. The real Jeanine actually passed away on 9/11. Some people made it very clear that they didn’t really want their names used in this story. So I had to take some creative license.

I have an 18-year-old daughter, and I think it’s very important for us to empower young women to find their voice and their own sexuality and not have it handed to them or defined by men. I think especially as women, I think it’s a time for us to rally around and support each other.

The rape scene was a very difficult one to film, which is true, and I wanted it to be a pretty unflinching portrayal because it’s something I carried around for many years. I didn’t even conceive of it as a rape until my AD called it as a rape scene. So I think it’s important for us to take a look at that and understand consensual sex is consensual sex, and nonconsensual sex is not OK, no matter what.

As this is your directorial debut, any obstacles or lessons learned along the way?

I think it’s always going to be a super challenging thing to get a movie made. You need to be really passionate about it. And be unafraid and unapologetic and kick the door down.

Is it easier to be a drug dealer or to make a film?

And to make a film — the most beautiful part of making a film is that it’s a collaborative effort. But you have to make sure everyone’s on board. You have to hold a vision and steer the ship. You can’t just be a f-cking tyrant like you are when you’re a drug dealer. You cannot do that, nor should you, when you’re making a film.

I have a film, a sort of gritty, NY cop indie. It’s a story of a kid who gets shot and the cop who shoots him. And told through both their lenses, to highlight there’s the same kind of PTSD underlying both of their drive. I also have a TV series that I’m working on called “Madame Mommy.” It’s good as a creative to keep creating. Otherwise you sit at home and eat potato chips.

Is there anything else you want to add? 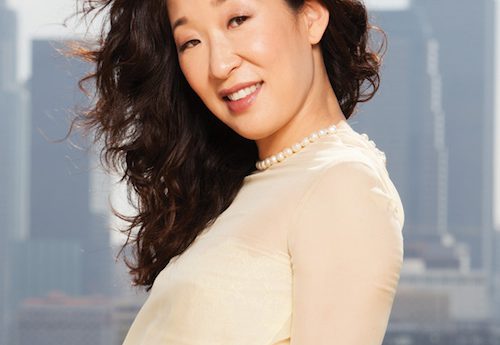 Sandra Oh remembers the moment she was first offered the lead role in the upcoming BBC America series “Killing Eve.” “I was flipping through the script going, ‘Where’s the […]