Sandra Oh remembers the moment she was first offered the lead role in the upcoming BBC America series “Killing Eve.”

“I was flipping through the script going, ‘Where’s the doctor? Where’s the receptionist?’ What part is it for?” Oh recounted, at a “Women Breaking Barriers” panel for Sundance TV last weekend. “And my agent said: ‘Eve!’”

Despite her years in the business, most prominently as Cristina on ABC’s “Grey’s Anatomy, Oh said she was taken aback by the thought of being offered a lead role — and it was when she realized that things were truly changing in Hollywood.

“I realized that this far into the game, I still was thinking that way,” said Oh, who had grown used to playing stereotypical Asian American roles like doctors and receptionists for nearly 30 years. “After years and years of compounding a belief system, it felt like someone was waking me up and saying, ‘You don’t need to be part of that belief system anymore.’”

The thriller drama, created by Phoebe Waller-Bridge, follows a psychopathic assassin who is being chased by a woman named Eve, a “bored, whip-smart, pay-grade security services operative whose desk-bound job doesn’t fulfill her fantasies of being a spy.”

“Killing Eve” is set to premiere on BBC America on April 8.

Watch the Sundance panel below: 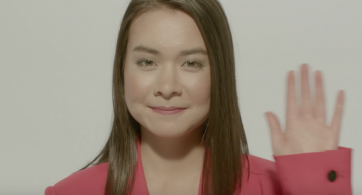 What happens when you’re stuck in a room sitting in for people on drugs? Ask Mitski, because that’s exactly what she does in a new short film titled “SITTING,” […]