Taika Waititi, the Māori director, star and writer of Nazi satire “Jojo Rabbit,” won the Best Adapted Screenplay Award. Waititi is the first indigenous New Zealander to win an Oscar. “I dedicate this to all the indigenous kids in the world who want to do art and dance and write stories,” Waititi said. “We are the original storytellers, and we can make it here as well.”

But that wasn’t the only history-making moment of the evening. “Parasite” filmmaker Bong Joon Ho picked up the awards for Best Director and Best Original Screenplay, the latter shared with writing partner Han Jin-won (“Okja”). In his speech accepting the Best Director Award, Bong thanked the rest of his fellow nominees, including Martin Scorcese, whom he credited with inspiring his journey as a filmmaker. “When I was in school, I studied Martin Scorsese’s films,” Bong said. “Just to be nominated was a huge honor. I never thought I would win.”

And, of course, the film scored the Best Foreign Language Film Award—no surprises there.

But the biggest news? “Parasite” won the Academy Award for Best Picture, making it the first-ever foreign language and South Korean film to do so.

Shortly after Jane Fonda presented the award, support began pouring in from all over social media. Priyanka Chopra, Sandra Oh and K-pop supergroup BTS were among the many who shared words of enthusiasm.

All those Oscar wins led to quite a few magical on-screen moments, like when Bong took a peek at just one of his statues.

And when he got creative about what to do with them.

Congratulations to all the winners! Now, go “drink until next morning.”

To celebrate the Academy Awards this weekend, we chose three of our social media followers to receive Blu-Ray DVDs of “Parasite,” after they shared why they want to own a copy for themselves. Check out the winners’ answers below. 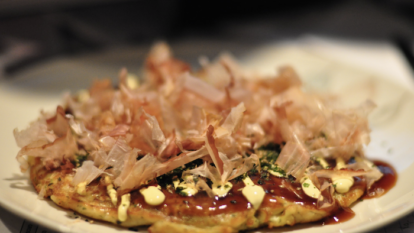 Happy National Pizza Day! If you think you have had enough of this well-known Italian savory dish, then you definitely haven’t tried these Asian recipes. Let us take you […]