The month of May is here, which means spring has sprung and Asian Pacific American Heritage Month is officially upon us. APAHM extends through May 31 and celebrates the legacy of Asian Pacific Americans and their manifold contributions to American culture. What better way to honor the month than by presenting some new reads from API authors?

With these 11 books in your arsenal, your reading quota will be set for at least the month of May and possibly even beyond. Happy reading!

1.“Zachary Ying and the Dragon Emperor” by Xiran Jay Zhao, May 3

Chinese-Canadian author Xiran Jay Zhao takes us through a fantastical Harry-Potter-meets-Percy-Jackson adventure in her second novel, “Zachary Ying and the Dragon Emperor.” Follow 12-year-old protagonist Zack as he embarks on a journey to save his mom’s soul from demons, all while facing off against some of China’s greatest historical figures and myths.

The mythology theme continues! In Jenna Yoon’s middle-grade release “Lia Park and the Missing Jewel,” 12-year-old Lia finds her life constrained by her overprotective, scrutiny-inclined parents. But things take a turn when she sneaks out to a birthday party, breaking an ancient Korean spell and leaving her parents—as well as the jewel her family has guarded for generations—vulnerable, to be kidnapped by an evil force. Find out what happens when Lia embraces her newfound magical powers and travels to an undersea kingdom to find her family’s jewel, before it’s lost forever.

3. “Constellations of Eve” by Abbigail N. Rosewood, May 3

Drawing from her own lived experiences, author Abbigail N. Rosewood brings us a novel about a single love story through alternate universes. Protagonist Eve is an artist, mother, friend and wife, struggling to accept loss and embrace life despite its missing pieces. Throughout “Constellations of Eve,” Eve is afforded more than one chance to right her wrongs and take a stab at fulfillment—but will she ever succeed? Rosewood muses on loss and how the smallest of choices can change everything in this deeply thoughtful read about the destructive nature, and beauty, of love.

If you’re looking for some action without the adventure, check out Lillie Vale’s YA rom-com “Beauty and the Besharam,” in which spunky, 17-year-old Kavya is forced to work all summer alongside her nemesis, Ian Jun. Exhausted by the years of bantering and bickering, the pair’s friends decide it’s time for their rivalry to end, using a series of challenges to hopefully satiate their competitive spirits. But before tensions can settle they’re heightened again, this time by something no one saw coming: romance.

In the mood for millennial romance, influencer drama and… weightlifting? Author Amy Lea has got you covered with her debut novel, “Set On You.” This story follows curvy fitness influencer Crystal Chen, whose competitive relationship with fellow gym member, firefighter Scott Ritchie, becomes flirtatious after a run-in at their grandparents’ engagement party. Once a photo of the two goes viral, however, comments from internet trolls begin to flood in and put their new romance to the test.

Although mainstream media may say otherwise, the immigrant experience isn’t always about perpetual resiliency and looking toward the future. Sometimes, it’s about tough and even tougher times, and sometimes, it’s about mourning what’s been left behind. Marie Myung-Ok Lee’s new novel, “The Evening Hero,” explores these concepts in depth, following the story of Dr. Yungman Kwak, an immigrant obstetrician in rural Minnesota who’s had a penchant for routine the last 50 years. When a letter arrives threatening to expose secrets that could tear down the life he’s built, Kwak begins to question the notion of the “American Dream” and everything he’s ever worked to achieve. Described as dark but comical, this read bounces between past and present, asking what it truly takes to get from one place to another and whether that sacrifice is worth it.

The Coalition of Asian Pacifics in Entertainment, or CAPE, has edited a new collection of nonfiction essays by various authors, speaking on the nuances of growing up in the USA as an API individual. If you enjoyed Cathy Park Hong’s “Minor Feelings,” gear up for even more illuminating essays about the Asian American condition. The writings presented in this collaboration muse upon the model minority myth, microaggressions, the fetishization of the API body and both covert and overt racism. Featured writers include SuChin Pak, who penned the intro, Melissa de la Cruz, Teresa Hsiao, Edmund Lee, Aisha Sultan and Aneesh Raman, among many others.

8. “We Were Dreamers: An Immigrant Superhero Origin Story,” by Simu Liu, May 17

Simu Liu, best known for his role as Shang-Chi in “Shang-Chi and the Legend of the Ten Rings,” has penned a memoir that publishes on May 3. In “We Were Dreamers: An Immigrant Superhero Origin Story,” Liu explores different phases of his life—documenting the struggles of being raised by his grandparents in Harbin, China and being whisked to Canada at the age of 5, as well as his difficulties found in parental expectations and cultural stereotypes. The tale also details his rise to the role of Shang-Chi, which began with a failed accounting career (no, seriously). Make sure to check out this release to get to know the Marvel Cinematic Universe’s first Asian superhero.

From author Claire Ahn, YA novel “I Guess I Live Here Now” is essentially a K-drama in book form. Protagonist Melody is abruptly moved across the globe from her hometown of New York City to her dad’s hometown of Seoul, South Korea. As she adjusts to her new normal, Melody discovers all Seoul has to offer—delicious food, cute clothes, cute boys—but it all comes crashing down once she begins uncovering family secrets. With friendship struggles and romance woven throughout the novel, “I Guess I Live Here Now” brings everything to the table for all you drama-lovers out there.

To all those itching for a sci-fi fix, this one’s for you. Authored by David Yoon, whose previous works include the thriller “Version Zero” and the young adult rom-com “Frankly in Love,” “The City of Orange” chronicles the tale of a man who wakes up with no memory in an apocalyptic landscape unknown to him. From there, he struggles to survive until he meets a young boy, at which point everything he thought he knew is flipped on its head. 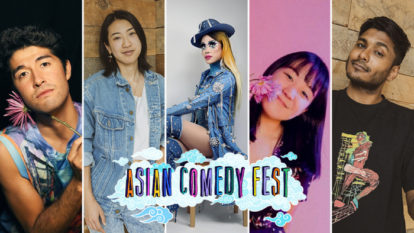 Join the Asian Comedy Fest to catch some of your favorite Asian American and Pacific Islander comics on May 6 and May 7.