When Chantal Thuy went to see Tracy Letts’ Pulitzer Prize-winning “August: Osage County” in New York in 2009 as a drama student, she was electrified by the experience, especially the color-blind casting. The lead was played by Phylicia Rashad—a.k.a. Clair Huxtable from “The Cosby Show”—for a role that had been played by white actresses earlier during its run on Broadway.

It’s all come full circle. Thuy, who today is best known for her character Grace’s fan-favorite romance with Nafessa Williams’ Anissa on the CW’s DC Comics series “Black Lightning,” is starring in Letts’ “Linda Vista” onstage in Los Angeles, alongside a handful of the same cast members from “August.” In the play, Thuy is a smart-ass, pink-haired Vietnamese American millennial named Minnie, who becomes entangled with a 50-year-old man stumbling through a midlife crisis.

Thuy’s used to playing outsiders like Minnie, who’s the only person of color on the stage, and the youngest. In Montreal, where Thuy grew up, she was often the only Vietnamese person around. Her parents settled there after fleeing from the Vietnam War. Montreal “is not a melting pot like it is in California,” Thuy said. She had almost exclusively white friends as a kid, and in school faced name-calling like “chink.” As she got older, she gained an awareness for how diverse the Asian American culture could be outside Montreal. And the lack of Asian representation in media, especially as she began studying acting, was glaring.

She’s channeled those experiences into the stories she is helping to tell. Last year, she acquired the option to Caroline Vu’s “That Summer in Provincetown,” a novel chronicling three generations of a Vietnamese Canadian family. Thuy had been looking to write a story exploring themes of sexuality, family relationships and the weight of cultural baggage when she came across the book. “I was like, ‘Oh, she’s basically written it!’” She plans to turn “Provincetown” into a screenplay.

“With all the great strides that have been happening for Asian American representation, a big part of that is also creating our own work,” said Thuy. “I want to be the first to make a French-Canadian-Vietnamese film.”

Her most visible project at the moment is “Black Lightning,” which already boasts a diverse cast, led by the titular African American superhero. The series revolves around a group of metahumans, centered around Black Lightning and his family. Thuy’s Grace Choi is a bisexual bartender who kindles a troubled romantic relationship with Anissa, Black Lightning’s daughter. Later on in the series, we learn that Grace herself is hiding powers, though we don’t know exactly what they are yet. Grace, one of the few LGBT Asian American superheroes on television, is descended from the Amazons in the original comics. She later joins a superhero team called, fittingly, the Outsiders.

The role has introduced Thuy to a large base of young fans, many of whom she interacts with on social media. And some have let Thuy know how empowering it can be to see a LGBTQ woman of color portray just that on the small screen. They leave her comments on Instagram like, “Just wanna say that I’m very glad you are playing Grace because that shows a lot of representation to Vietnamese queer people and interracial couples! I feel very represented,” and “Two QWOC (Queer Women of Color)! This is beautiful. Representation Matters.”

“I feel so lucky to be able to play a character that means so much to [fans], and then be there as a person for them too,” Thuy said.

And whether it’s as Grace, or Minnie, or as whatever kind of content creator Thuy may end up pursuing: “I always think of myself as what I would have liked to have.” So I feel like, ‘Oh sh-t!’ You can’t predict these things, and you just gotta live in the gratitude.” 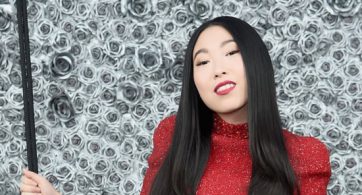 Everyone’s favorite Korean-China-American actress and rapper is on an unstoppable roll! And she has the killer makeup looks and outfits to match. Nora Lum aka Awkwafina blazed into the spotlight […]