From the “Suite Life” series to the “All The Boys I’ve Loved Before” films, Brenda Song and Lana Condor are iconic faces for Asian American representation. The two stars have finally met Zoom-to-Zoom in the most recent edition of Character Conversations.

Song has been a staple of everyone’s childhood, with her role as London Tipton on “The Suite Life of Zack & Cody” and the sequel series, “The Suite Life on Deck.” Outside of roles on Disney, she has continued to act in films like the thriller “Secret Obsession,” the Hulu comedy “Dollface” as Madison Maxwell and the upcoming series “Blue Eye Samurai.” Condor, meanwhile, stars in the sci-fi romance “Moonshot,” which releases today, March 31, on HBO Max. No stranger to romantic roles, Condor portrayed Lara Jean Covey in “To All the Boys I’ve Loved Before” and its two sequels. She’s also played mysterious assassin Saya Kuroki in “Deadly Class” and recently signed on to the live-action and animated hybrid film “Coyote vs. Acme.”

Moments after the two greeted each other on-screen, the conversation was interrupted by mutual co-star Cole Sprouse. “This is not fair. When I found out that you got to do a solo interview with her, I was so upset,” Sprouse said as he popped onto Condor’s side of the screen. The two joked with one another about catching up before Sprouse departed.

Song and Condor then began to speak about how excited they were for “Moonshot,” as Song was always fascinated by space and was curious about what drew Condor to this film in particular. “I don’t often get scripts that are space-oriented for the 20-year-old,” Condor said. “I was excited to do green screen work and do a project that feels different and also doesn’t take itself too seriously. Something I’ve really wanted for my career is to do projects that make people feel happy afterward.”

Song agreed, drawing on similarities from her own career. “I get that; I remember after finishing ‘Suite Life,’ everyone told me to do something dark or crazy,” Song recalled. “But I’m a silly person; I love taking people out of their lives and entertaining them and making them laugh.”

Condor and Song later reflected on their roles as Asian American actresses, giving each other compliments on their respective careers before bonding over their shared love of food and making plans to meet up for lunch in the future. To watch the full interview, watch the video above. Hopefully, we’ll be seeing these two interact in the future more often! 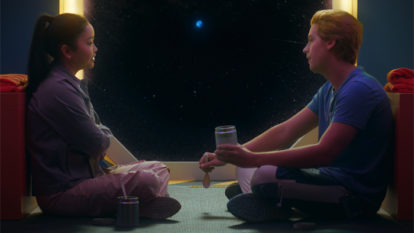