Garbage is overwhelming Earth’s land and oceans, people are vying for tickets to get off the planet, ungodly expensive rides on rocketships are slowly becoming the norm, a pair of space travelers find themselves drawn to one another while flying through the cosmos—no, this isn’t a real-life account of a Blue Origin flight. We’re talking about the new HBO Max romantic comedy “Moonshot.”

Streaming today, March 31, “Moonshot” tells the story of two college peers: free-wheeling Walt (Cole Sprouse) and down-to-earth (pun intended) Sophie (Lana Condor) as they navigate literal space and their respective futures. While Walt desires a life far, far away from God’s green earth—so much so, he applies 37 times to Leon Kovi’s (Zach Braff) Kovi Industries Mars space program, a take on Elon Musk’s SpaceX—Sophie just wants to save the earth with her garbage-eating algae biotechnology, and to spend time with her boyfriend, Calvin (Mason Gooding). Who lives on Mars. Yeah, it’s complicated. Despite their attempts to get away from one another, Walt and Sophie cross paths aboard a flight to the red planet and from there, “Moonshot” evolves into a typical, but quick-witted rom-com, all on a spaceship barreling through the stars.

Like maybe every rom-com to come before, the film focuses on taking ownership of one’s path in life, and accepting that dreams can change over time. Walt desperately wishes to alter his future with a one-way ticket to Mars, while Sophie wants to stay on earth to save the earth, despite her unrelenting commitment to the intergalactically long-distance Calvin. Naturally, without any spoilers, things change for the mismatched pair during their fateful 35-day trip one planet to the right.

Even with its somewhat trite plot, the film presents Sprouse and Condor in roles that sit just beyond their usual wheelhouses, which is refreshing. Gone are the Byronic musings of Sprouse’s iconic “Riverdale” character Jughead Jones; instead, we get Walt, who’s also a self-proclaimed outsider, but in a too-obtuse-for-admission-into-space-exploration-programs kind of way. Essentially, Sprouse plays him a little awkward and kooky, but decidedly unpretentious. Considering Condor’s expertise in the young adult rom-com genre, it would be almost too easy for her to fall back into the careful wallflower Lara Jean from Netflix’s “To All the Boys I’ve Loved Before,” but Sophie marks an entirely different direction for the actress. Her character is tenacious, hardheaded and thrives on dryness. She dishes out judgmental glares and eye-rolls constantly, and possesses an unfaltering confidence, especially around Walt. Still, Condor makes sure Sophie is multidimensional, using details like vocal inflection and physical gesture to add a substantial amount of interiority to the role.

Because Walt and Sophie are personality foils, there is already some inherent will-they-won’t-they tension between the two. However, Sprouse and Condor’s comedic chemistry is the real standout of the film—the two banter and play off each other so effortlessly that “Moonshot” starts to feel more like a buddy comedy. That isn’t to say the two lack romantic chemistry, but it’s built on a strong foundation of humorous moments like exasperated looks and teasing jabs. Frankly, the purely romantic scenes in “Moonshot” can be lacking at times, and not really due to the acting skill, it’s just that something–something that’s missing. While Condor fits comfortably into every scene, Sprouse unquestionably has more of a talent for the lighthearted moments (everyone say, “Thank you, ‘Suite Life of Zack and Cody’”). He can come off as not fully convinced during romantic overtures, but overall gets the job done. Also, quick shout-out to the typically alluring Gooding, who thoroughly de-charms himself for the role of the often infuriatingly oblivious Calvin.

As expected of an interstellar romance, the film also visually captivates. In one beautifully shot scene, Walt and Sophie sit cross-legged in a dimly lit room, poring over a holographic galaxy map with bursts of white, red and blue light overlaying their faces. As a result, Walt and Sophie appear to be the only two people alone in the universe, even if it’s just through a projection. Director Christopher Winterbauer takes full advantage of this kind of galactic imagery throughout the film, immersing the viewer in the futuristic landscape. “Moonshot” won’t let you forget it takes place in space, and it works—its most compelling quality is the setting. The film’s production design also does a great deal of worldbuilding, mixing familiar elements of the present, like universities and cafes, with futuristic elements of AI robots or hints of chrome.

However, as many rom-coms do, “Moonshot” has trouble closing out its third act with a bang. Instead, it goes somehow mundanely off the rails to tie up far too many loose ends in its last 20 minutes, swapping plot momentum for sluggish exposition. With confrontations between Sophie and Calvin, Sophie and Calvin’s mom, Sophie and Walt and an oddly placed cameo of Braff as tech genius Leon Kovi, it becomes difficult to understand where the film’s heading—not because of a complicated plot, but due to sheer whiplash. As a result, Walt and Sophie’s stories both get lost in the sudden clamor. One can’t help but wish to go back to the more grounded tone of the galaxy hologram scene in the middle of the film.

Despite “Moonshot”’s unavoidable cliches, the film valiantly tries to cover new territory in the teenage rom-com genre, and succeeds, albeit only under terms of the out-of-this-world setting. It’s mostly well-acted, thoughtfully shot and although formulaic in terms of plot, presents a surprisingly progressive outlook on the colonization of Mars (why shouldn’t we try to save the planet we already have, instead of abandoning it and the less fortunate?). The film doesn’t reinvent the wheel by any means, but does provide a strong basis for more inventive, fantastical rom-coms to come. Don’t go into “Moonshot” expecting “When Harry Met Sally” or “Star Wars,” because it’s neither. Instead, think about “After” or “The Kissing Booth,” or that 2016 J-Law film no one saw, “Passengers,” and you might be pleasantly surprised. 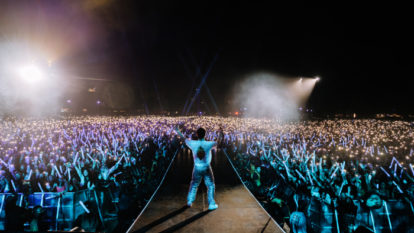 How the creatives behind 88rising are making a space for Asians and Pacific Islanders in mainstream music.