With the global frenzy surrounding BTS and the recent wins from BLACKPINK at the E! 2019 People’s Choice Awards, it’s no surprise that K-pop has made its way into the mainstream music industry worldwide. And while I love me some catchy pop tunes, perfectly in-sync dance numbers and eye-popping music videos, there are many underrated gems in Korean music outside of K-pop. If you’re a newbie to the Korean indie scene, then you’ve found yourself in the right place. It’s time to spice up that playlist with these amazing artists.

Although he doesn’t associate himself with the K-pop genre, Dean has become a huge name in the South Korean music industry. His velvety voice and incredible talent for writing and producing quality songs have made him a popular solo artist with a number of record hits. It also doesn’t hurt that he’s easy on the eyes.

This synth-loving duo from Seoul is a dream team made up of Toby Hwang (guitars, synth) and Annie Ko (lead vocals). Although they’re based in Korea, they sing a majority of their songs in English. Featuring dreamy vocals, atmospheric ambient music and plenty of groove, their music is perfect for midnight drives.

It’s impossible not to smile and feel your spirits lift when listening to OOHYO. Not only is she making waves in Korea, she frequently performs abroad and collaborates with British and Scottish bands. Her gentle, lilting voice and contemplative music are reason enough for you to stan this indie queen.

In the indie R&B sphere, offonoff are the real deal despite having only debuted in 2016. They’ve already released numerous collabs with other prominent R&B and hip-hop artists such as Dean, Tablo from Epik High and Punchnello. This duo is quickly rising to popularity with their lo-fi beats and soothing melodies, so keep your eye on them.

Jo Hyu-il, better known as The Black Skirts, is a one-man band who’s been around for the past 12 years. This veteran artist is known for his folksy, melancholic ballads that are perfect to cry along to during a break-up. And if you’re single (raises hand), then that’s all the more reason for you to sit back and immerse yourself in his beautiful music.

Some of you may have already heard of this up-and-coming star through her single “Wine,” which was made famous by her co-producer, BTS’ Suga. Suran’s funky, upbeat style and strong, nasal voice are reminiscent of American indie pop artists like Misterwives. Songs like “1+1=0” and “Surfin’” will make you want to slide around your house with socks on and dance like nobody’s watching, à la Tom Cruise in “Risky Business.”

Last but not least, perhaps the most revered Korean indie band in the industry: HYUKOH. Made up of 4 members, this band has an international, cult-like following. It probably helps that the frontman and lead singer, Oh Hyuk, can speak fluently in Korean, Mandarin and English. With songs in all three languages, HYUKOH’s lyrics are often considered deep and thought-provoking, while their music has moved many fans across the globe. 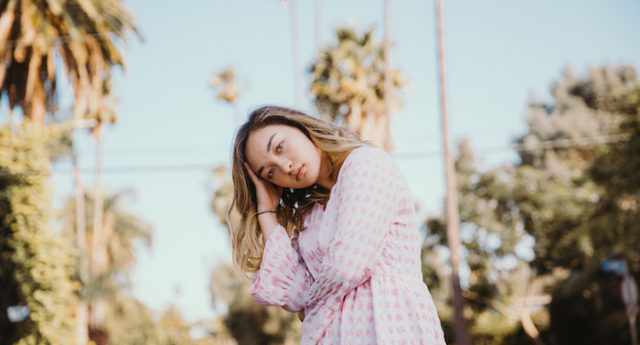 At a recent sold-out show at Los Angeles’ Roxy Theater, musician mxmtoon took to the stage as the audience chanted her first name, “Maia.” In front of a bedsheet-size […]