A recent video of a fireworks display has gone viral. The stunning 80-second art installation, a towering ladder made of fireworks, reached 1,650 feet (500 meters) into the sky.

Created by Cai Guo-Qiang, Sky Ladder was showcased in June in Quanzhou City in China’s southeast Fujian Province. The firework and gunpowder studded wire ladder was carried up by a large weather balloon. Referred by some as a “stairway to heaven,” the project started off as a dream for Cai 21 years ago. His first attempt was in 1994 but it was never launched due to strong winds. Cai tried again in 2001 when Shanghai hosted the APEC Summit, but was restricted aerial access due to the September 11th attacks.

Sky Ladder is dedicated to Cai’s grandmother who just celebrated her 100th birthday. The beautiful fireworks show was a way Cai wanted to thank his grandmother for supporting his dream of being an artist.

The Chinese contemporary artist currently lives and works in New York City. Over the years, Cai has travelled the world to work on projects and exhibitions, many of them incorporating gunpowder and fireworks with various mediums. The pieces are incredible, inspiring both awe and suspense when it comes to working with explosives. Check out some of his other dazzling installations, including the opening and closing ceremony of the Beijing Olympics in 2008: 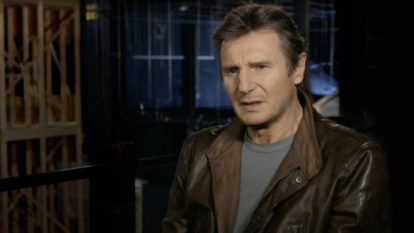 by REERA YOO | @reeraboo editor@charactermedia.com Liam Neeson has signed on to portray U.S. Army General Douglas MacArthur in Operation Chromite, a Korean blockbuster set during the Battle of […]