The 21-year-old just returned to the Olympic podium after becoming the youngest woman to win a gold medal in snowboarding at the PyeongChang 2018 Winter Olympics. She broke records again in Beijing on Feb. 9 of this year when she became the first woman to win two consecutive gold medals in the snowboard halfpipe events. Kim, the only American woman participating in the event, scored an impressive 94.0 in her first run with a 900 and two 1080s, seizing gold for Team USA. The silver medalist, Spain’s Queralt Castellet, landed a 90.25, four points below Kim, while Sena Tomita of Japan grabbed the bronze with a score of 88.25.

This success comes after Kim took a 22-month hiatus from snowboarding following her win in PyeongChang. The Torrance, California native explained in a New York Times exclusive that she decided to take a break from the limelight, during which time she enrolled at Princeton University, and focused on gaining a normal college experience to help ease the pressure of being one of the youngest star athletes on the slopes. She only returned to the sport a year ago, but her daredevil nature clearly hasn’t been affected by her time off. During her second and third runs yesterday, she failed just short of completing a cab 1260. If she had achieved the trick, she would have become the first woman to do so in competition history.

Relive Kim’s gold-medal performance on the NBC Sports channel, and be sure to keep watching other athletes make history at this year’s Winter Olympics! 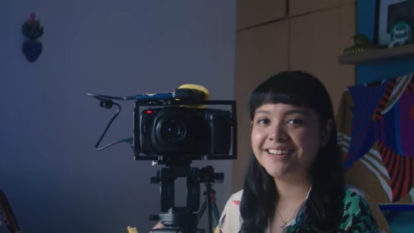 This year’s fest saw a number of exciting premieres in the Documentary and Dramatic competitions, in addition to the return of the Asian Pacific Filmmakers Experience.