In its long history and countless offshoots, from TV shows to books to sequels, we’ve never seen a “Star Wars” tale led by an Asian hero. The closest we recently came was Kelly Marie Tran’s Rose Tico in “The Last Jedi,” or Donnie Yen as Chirrut Imwe in “Rogue One.” That’s about to change with Kazuda Xiono, a Resistance spy voiced by Christopher Sean, who will lead his team to infiltrate the First Order in Disney Channel’s new animated series “Star Wars Resistance.”

The series, which premieres Oct. 7, is set after “Return of the Jedi” and six months before “The Force Awakens,” and created by Dave Filoni, who’s been behind other Lucasfilm Animation projects like “The Clone Wars” and “Rebels.” Sean is joined in the voice cast by Bobby Moynihan, Donald Faison, Jim Rash and Suzie McGrath, as well as by guest stars like Oscar Isaac and Gwendoline Christie, who will reprise their roles from the live-action series.

“Kaz is eccentric, he’s clumsy, he’s a leader, And he just reacts,” Sean, who is Japanese American, said. “When something is not right, he goes for it to fix it and make it right. He wants to be the best, he’s 100 percent committed — it’s a really fun character to play.”

For Sean, the show represents his first-ever voice project. And being “Star Wars,” it’s also a particularly exciting one — his entire family loves the movies, and he grew up quoting lines from “Empire Strikes Back.” “My mom, my dad, all of us would do Yoda and Chewbacca voices,” he said. “My relationship with ‘Star Wars’ is that I’ve always felt like it’s been a part of my life. Now to be a part of the Lucasfilm family, wow. To have an original character in the franchise, it’s surreal.”

Kaz is a young pilot in the New Republic’s Navy who is recruited by Poe Dameron to join the Resistance, led by legendary General Leia Organa. Kaz is eager to become a spy in taking down the First Order, even if it means going against his father, a senator whose approval he’s been seeking his entire life. As he tells Poe: “I grew up in the New Republic. It’s all I know. I want to fight for it.”

Sean can relate to Kaz in more ways than one. He grew up in a family with a history of Navy service, including his father and grandfather, and thought he was on a similar path until he realized it wasn’t for him. “I told my dad, ‘I want to be a model,’” Sean recalled. “And [my father] sad, ‘Uh, what?’”

In 2010, Sean booked his first TV gig playing a waiter in “The Bold and Beautiful.” Four years later, he was a regular in the storied daytime soap opera “Days of Our Lives” as Paul Narita, a gay Asian American baseball player. He’s also appeared in “Hawaii Five-0” as crime boss Gabriel Waincroft.

“When it came to this role [as Kaz], I knew nothing about voice acting,” he said. “How do you translate an eyebrow, a smirk, when they can’t see it? Working in the room with amazing professionals like Oscar Isaac, Jim Rash and Bobby Moynihan, and to see them ad-lib and improv—iron sharpens iron. Seeing them only makes me better, so I’m grateful for that. I’m a student of life. I love to learn.”

He said booking the character was a milestone “Obviously in my career, but also for inclusion and diversity, and the business entirely.” There’s more coming—Sean said plans are underway to produce his own films and TV series. “I have a lot of irons in the fire, and I’m just really excited to start bringing out more creative intellectual properties,” he said. “And to bring roles to the Asian community.” 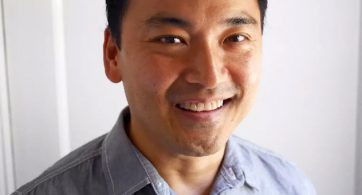 David Yoon’s debut novel “Frankly In Love” is set for an on-screen adaptation before hitting book shelves. Alloy Entertainment and Paramount Pictures will produce the book’s film. “Frankly In […]