With the largest Vietnamese American population outside of Vietnam, Little Saigon is a prime spot for SoCal residents to celebrate the Year of the Rabbit. The Asian Garden Mall kicked things off on Jan. 9 with their annual Flower Festival, an outdoor market where folks can buy a wide array of colorful—and lucky—blooms to ring in the new year. The flower market only runs through Jan. 20, but don’t fret, Little Saigon has many more festivities to offer. One of the biggest is Jan. 22’s Tết Parade, presented by the city of Westminster. Admission is free, and the celebrated event typically garners over 10,000 in-person attendees and over 250,000 international guests who tune in to the livestream. The parade will begin at 8:30 a.m., starting at the intersection of Bolsa Ave. and Magnolia Ave. and traveling eastbound towards Bushard St. Be sure to arrive early to get a prime viewing spot!

Lunar New Year is returning to Disneyland’s California Adventure Park! Bring along the whole family to celebrate with Mickey and Minnie, who will be decked out in festive attire, along with other fan favorite characters Mulan and Mushu. In addition to activities like Mulan’s Lunar New Year Procession, Hurry Home – Lunar New Year Celebration, and holiday entertainment at the Paradise Garden Bandstand, the park is also offering a tasty adventure in the form of Lunar New Year Marketplace. Park-goers will be able to purchase some delicious creations: bao, noodles, sweet treats, and, yes, spiked drinks for guests over 21. The Lunar New Year celebration at Disney will run from Jan. 20–Feb. 15, so get your tickets here!

For those farther north, Monterey Park will host their annual Lunar New Year Festival on Jan. 21 and 22. The festival consists of all the expected delights, including delicious food, gift vendors, and live entertainment (including lion and dragon dancers, of course). Plus, the festival’s carnival fun zone offers amusement rides. The event usually sees around 100,000 attendees a day, so it’s a good thing the celebration has plenty of festivities to go around!

This year, the historic San Francisco Chinese New Year Parade will take place on Saturday, Feb. 4. Started in the late 19th century and helmed by the city’s Chinese Chamber of Commerce since 1958, the Chinese New Year Parade has over three million viewers through in-person attendance and at-home broadcast watchers. The event features traditional elements of Chinese culture, such as lion dances, traditional Chinese fan dances, and tanggu drum lines. Guests will surely see some rabbits on the opulent parade floats, and can also watch community groups showing off their unique talents. Attendance is free for all, but if you want seats in the bleacher sections placed throughout the parade route, you can purchase tickets here.

Year of the Rabbit on Parade

Along with the Chinese New Year Parade, the Chinese Chamber of Commerce of San Francisco is also throwing the Year of the Rabbit on Parade, a rabbit statue scavenger hunt for community members. Painted by local artists, five different statues sponsored by Alaska Airlines, Golden State Warriors, ICBC, Lucky California, and Sky River Casino are on display around the city as a public art project. Try your best to find all five before the rabbits disappear on Feb. 5!

Lunar New Year at Oakland Museum of California: Year of the Rabbit

The Oakland Museum of California’s Annual Lunar New Year Celebration is back for its 22nd year! OMCA prides itself on offering a diverse and inclusive experience for all visitors, and what better way to unite the API community than through food, festivities, and discussion? On Jan. 29, OMCA will open their doors to the public at 11 a.m., and the festival’s opening celebrations will hit the Garden Stage at 12 p.m. Food and beverages curated by chefs from around the Bay Area will be available for purchase at the Town Fare Sundeck, Food Market, and Garden. Of course, that’s not all—varying cultural performances will take place throughout the day, and an important panel talk about the intersection of Asian and Black histories in Oakland will be held in the History Gallery at 1 p.m. The day will end at 4 p.m. with a closing ceremony dragon dance performed by Developing Virtue Secondary School. Snag your tickets to the festival here!

Calling all Chicagoans! One of the very best ways to honor the Year of the Rabbit is by participating in 2023’s Argyle Lunar New Year Celebration. From a parade to delectable cuisine to family-friendly activities, Argyle has it all! The celebration will start on Jan. 28 at 12 p.m., with the anticipated parade kicking off at 1 p.m. Besides keeping an eye out for the whimsical floats and energetic parade participants, attendees should take advantage of local community groups’ pop-up activities within the neighborhood, like story and craft time at the Bezazian branch of the Chicago Public Library, the Argyle Art Walk, and more. If you’re in need of a snack, there are also many restaurants and small businesses to choose from all around Argyle. So, showing up on an empty stomach will afford you the chance to try some mouth-watering Vietnamese cuisine.

For our film connoisseurs, Letterboxd users, and folks who just don’t feel like leaving the house to ring in the Year of the Rabbit, Chicago’s Asian Pop-Up Cinema film festival will have a slate of films available to stream online. The Lunar New Year lineup consists of five Chinese projects spanning a variety of genres. There’s “Lighting Up the Stars,” a drama directed by Liu Jiang-Jiang that tells the story of an ex-funeral director who softens after connecting with a little girl mourning her grandmother’s death. Animated film “GG Bond: Ocean Diary” is directed by Zhong Yu and follows secret agent pig GG Bond through an underwater adventure (perfect for the kids!). “Four Springs,” a documentary directed by Lu Qingyi, offers a glance inside the lives of villagers who live in the remote town of Dushan. Check out their website to get more info on the films and sign up for your watch link!

After Lunar New Year on Argyle, head on over to Chicago Chinatown’s Lunar New Year Parade the next day, Jan. 29! Chinatown’s parade will start at 1 p.m. and run until 3 p.m. Onlookers will be dazzled by dragon and lion dances, multi-colored floats, and marching bands. Any group is encouraged to submit an application to walk in the parade, so expect to see grass roots and community organizations marching, too! The event is free, and will be presented and organized by Chicago Chinatown Community Foundation as well as Chicago Chinatown Special Events.

New Yorkers, gear up to enter the new year with high spirits and good luck. The 25th New Year Firecracker Ceremony and Cultural Festival at Sara D. Roosevelt Park is here to cleanse you of bad luck and unwanted ghosts! The park will host a pyrotechnic ceremony, where Better Chinatown Society will set off thousands of crackling firecrackers to ward off evil spirits as we head into the new year. There will also be prize giveaways, lion dancing, and traditional food booths for all attendees to enjoy. This celebration of the Year of the Rabbit begins at 11 a.m. on Sunday, Jan. 22, and goes until 3 p.m.—admission is free.

Lunar New Year Festival at the Met: The Year of the Rabbit

The iconic Metropolitan Museum of Art, aka the Met, is putting on a Lunar New Years celebration fit for any history book. This Saturday, Jan. 21, doors open at 11 a.m. for the Lunar New Year Festival: The Year of the Rabbit, with no additional purchase needed besides museum admission. Activities include first-come-first-serve photo ops, an AAPI Jazz Collective performance led by Peter Lin, zodiac charm-making, gallery chats, a fan dance workshop, and so much more. There truly is something for every member of the family to enjoy at this celebration. The event ends at 5 p.m., so be sure to arrive early to do as many activities as your heart desires!

A post shared by Yu and Me Books (@yuandmebooks)

For the youngest of the bunch, Yu & Me Books is hosting a Children’s Lunar New Year book fair at Seward Park Campus Library on Sunday, Jan. 22. This will be the store’s first annual new year’s book fair, and it features a lineup of some of the best API children’s book creators around: Eunice Chen, Gordon and Li Li, Ruth Chan, and many more. Besides having a slew of books available for purchase, the fair will provide activities to participate in, read-alongs and story times, and sweets from Brooklyn Bakesale. If you or your family needs a more relaxing Lunar New Year event, this is the one for you! 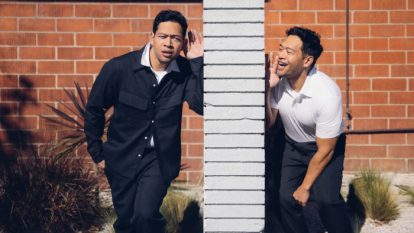 Actor and comedian Eugene Cordero has spent years logging roles on some of the most beloved sitcoms around. Now, he’s kicking things up a notch.