A slim two percent margin was all that separated Dia from taking top honors. On Tuesday, the half-Dutch, half-Korean singer performed her original song “Inventing Shadows.” Despite Dia having the top downloaded song on iTunes — which counts as a vote — Colon emerged victorious in the end, taking home the $100,000 prize and a recording contract.

It’s not all bad for Dia, however. Frampton’s popularity on the show will most likely lead to a record deal; Universal has an option in all the singers’ contracts stating they can sign them to a deal within 30 days of the show’s end, according to Entertainment Weekly.

Maybe that’s why Frampton didn’t seem fazed that she came in second during the season one finale. “When it was down to Javier and I, I was really excited,” she said after the show. “If it was someone I thought was a terrible person I would be like, ‘I really hope it’s not you.’ But he’s like a saint. He’s always Skyping with his kids. It’s so hard to balance the music industry with a family and he’s balanced it out so well. I’m so happy that he can do that now with a security belt.”

EW noted that Dia’s coach Blake Shelton and his wife Miranda Lambert — with whom Dia performed a duet in Wednesday’s results show — bought the “gorgeous Phillip Lim floor-length gown that Frampton wore to the finale.”

The Christian Science Monitor said the duet was the best part of Wednesday’s show.

The best of the night came when Dia Frampton sang with her mentor Blake Shelton’s new wife, country singer Miranda Lambert. They performed Miranda’s song, “The House that Built Me.” It was a moving performance and the sensitive cowboy, Blake was visibly touched when he told Dia that he finally understood why he was so emotional – it was because she had become family to him.

The other runners-up were Vicci Martinez, 26, of Tacoma, Wash., and Beverly McClellan, 41, of Virginia and Fort Lauderdale, Fla.

NBC, capitalizing on the success of the show, recently announced a six-city concert tour in late July. The four finalists will be joined by four other contestants: Frenchie Davis, Nakia, Casey Weston and Xenia.

Check out Dia’s duet with Miranda Lambert after the jump: 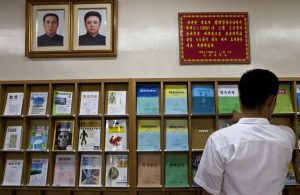 North Korea has shut down its universities for the next 10 months, sending students to work in factories, farms and construction as the country attempts to rebuild a fractured […]