“Crazy Rich Asians” is just another Hollywood movie, and for author Kevin Kwan, that was entirely the point.

The film has garnered attention for featuring only Asian faces, making it the first all-Asian cast  in a major Hollywood studio production to hit theaters since “The Joy Luck Club” in 1993. Director Jon M. Chu and Kwan say they dream of a day when casts like theirs are seen as givens, not anomalies. The pair made hard decisions and put huge stakes on the line to give “Crazy Rich Asians,” out in theaters Wednesday, all the same pomp and circumstance as any other big-time movie release in order to show the world — especially Asians — that they do belong in Hollywood.

“This is the first chance we’ve had in 25 years, goddamnit,” Kwan said at an August press conference in Los Angeles. “I wanted this to be an experience that future generations [of Asians] could look at and say, ‘Look, we achieved this.’” He imagined Asian and Asian American viewers would be dazzled by the notion of stars who look just like them getting the classic Hollywood treatment.

“We knew that putting it on the big screen meant something,” Chu said. He and Kwan turned down a lucrative deal with Netflix knowing that Asian audiences were hungry for a way to show their commitment to diversity and respectful representation. Putting the movie in theaters would give them that opportunity. “It was a way to let audiences say that this couple, this cast of characters, are worth their energy.”

Kwan agreed, adding that because his book was so beloved by families intergenerationally, he wanted the experience of watching “Crazy Rich Asians” to be a similar communal experience.

Based on Kwan’s bestselling novel, the film follows New York University professor Rachel Chu, who travels to Singapore to meet her boyfriend Nick Young’s family only to be met by disapproval from his mother. Like the title suggests, the romantic comedy centers specifically on crazy rich Asians, but it finds its universality in the characters’ devotion to family and love’s triumph over all.

Getting the right people was a challenge for director Jon M. Chu. “There was no stone left unturned,” Golding said about the casting process for the film. Chu posted a YouTube video calling for auditions back in January 2017 and was flooded with audition tapes from all corners of the world.

“I told Warner Brothers at the beginning that we were going to have to spend a lot more money and time on finding these people,” Chu said. Finding the actors to play these roles was an arduous task that was further complicated by Hollywood’s lack of exposure to Asian talent. Finding the perfect man to play Nick Young weighed especially heavy on the minds of the casting team.

“We were losing sleep over it,” Chu said. “We needed to find a leading man who was charming and easy, but at the same time a true gentleman.”

In the end, Chu found his Nick exactly where he needed him to be: in Singapore.

“Crazy Rich Asians” is Golding’s first acting gig.  He said he felt a special connection to Nick. “Nick Young has this inner struggle,” Golding said. “As much as he is proud of and loves his Asian roots, he wants to be his own person and make a life that is not dependent on family ties. For me, [playing Nick] was a celebration of everything that we as Asians are proud of: our family ties, our independence and the richness of our stories. For it to be told in a modern, dynamic way is unreal.”

Yeoh also spoke to the East-meets-West aspect of the film. “It was very interesting to me to watch [the actors] born in America because they’re different,” Yeoh said. “In Asia, we’re not minorities, so to hear [about Asian Americans’] struggles, how they have to fight for who they are is very interesting. I think the important thing to show here is that we are not desperate. We will fight to be represented the right way.”

Representation was a huge deal not only to the Asian cast but to the non-Asians behind the film. Producer Brad Simpson said that what made the experience truly valuable to him was the opportunity to converse with and learn from the people around him. He recalled an instance in which Wu wrote an impassioned email urging the writers to remove a line in the film about Rachel having never dated Asians because Wu felt that it would perpetuate negative stereotypes about Asian men.

Simpson said he valued the opportunity to learn. “I think a mistake people often make is, they’ll hire just one person of color,” Simpson said. “That creates competition for that role, and also you don’t get that dialectic.”

Chu believes that locking Asians out of Hollywood is also a huge mistake, especially when there’s so much Asian talent to go around. The casting process exposed him to many actors and actresses of Asian descent who were hungry for roles made for people like them. “I found so much talent that I want to build movies around,” Chu said.

“I have been waiting for a film like this forever,” Yeoh said. “This is long overdue. Five years ago, I don’t think Hollywood would even consider, but now I think they are listening.”

Kwan and Chu echo Yeoh’s sense of hope for a change in Hollywood’s tides. “The world is getting smaller,” Chu said. “I think we need to celebrate human beings in all their craziness, in all their cultures and see the similarities. The future is the next generation taking pieces from all these different influences and making it their own.” 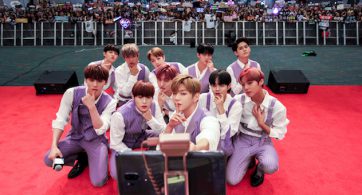 Jennifer Saldana, 19, remembers when she could only talk about K-pop to a handful of a people. “My friends who didn’t like K-pop, you could tell that they genuinely […]