Kevin Kwan’s debut novel is a ridiculous read – and we mean that in the best way. Set mainly in Singapore, the story follows the homecoming of Nicholas Young, who’s in town for the highly anticipated wedding of his best friend Colin Khoo to model/hotel heiress Araminta Lee. Nick is bringing his American girlfriend of two years, Rachel Chu, to the wedding. What Rachel doesn’t know is that Nick is a member of Singapore’s elite, and apparently everyone is out to end their relationship, from overbearing mothers to cutthroat exes.

What really makes Crazy Rich Asians so fascinating is that the novel is a hilarious insight into the social intricacies and hierarchies of the Singaporean jet set – new money vs. old money, Mainland Chinese vs. Overseas Chinese, traditional Chinese culture vs. traditions that are actually remnants of colonial rule. Calling upon his own childhood experiences, Kwan weaves great (and greatly exaggerated) details into his story that makes for a read you can’t put down. It’s got all the makings for a very entertaining movie, so when we heard that the production team behind The Hunger Games films had nabbed the rights to this summer’s best guilty pleasure read, we just had to come up with our own dream cast. Hollywood, better take notes!

Godfrey Gao as Nicholas Young, 32, a history professor at NYU with Cantonese pop idol looks (described as a Takeshi Kaneshiro lookalike) and heir to the Young fortune. Why: A ridiculously good-looking guy with international appeal is absolutely required for this leading man role, and the Taiwanese-Malaysian Canadian actor/model, touted as the world’s first Asian male supermodel, has been described as a younger Kaneshiro.

Gemma Chan as Rachel Chu, Nick’s girlfriend, a 29-year-old down-to-earth, natural beauty, raised by a single mother, who is also an economics professor at NYU. Why: An up-and-comer in Hollywood, this Chinese British actor can pull off Rachel’s sensible, effortless and intelligent charm.

Fan Bingbing as Astrid Leong, Nick’s cousin and closest confidante who also happens to be a double heiress and Singapore’s most sought after socialite. She’s married to Michael Teo. Why: The Chinese actress has the presence (and red carpet fashion cred) to play Singapore’s biggest style icon, oozing radiance every time she walks into a room.

Daniel Wu as Michael Teo, a son of schoolteachers and a graduate of Caltech (he was a National Merit Scholar!), the co-founder of a start-up tech company happened to land Singapore’s most sought after socialite. Why: Michael is a straight-laced former Armed Forces Elite Commando who is facing an eventual meltdown because of his marriage into high society. A hunk on the verge of a breakdown? Wu’s got plenty of acting experience (and the good looks) to pull that off.

Brenda Song as Peik Lin Goh, the youngest daughter of the new money Singaporean Goh family and Rachel’s close friend from Stanford. Why: Song can call upon her Disney days for the over-enthusiastic spunk it’ll take to play Peik Lin, one of Rachel’s few allies in Singapore.

Wang Lee Hom as Colin Khoo, Nick’s best friend and heir to the Khoo Teck Fong fortune, one of the richest families in the world. Why: Wang’s recent roles have required a disguise – perfect for a man disguising his true feelings about his upcoming nuptials. (Basically, we wanna see the Taiwanese American singer/actor in a Hollywood film.)

Angelababy as Araminta Lee, a luxury hotel heiress and supermodel who is engaged to Colin Khoo, and has a serious obsession with Astrid Leong and her couture wardrobe. Why: The Hong Kong-based Chinese actress/model has the young supermodel look down. We think she’ll be gorgeous as the society bride of the year.

Liza Wang as Shang Su Yi, grandmother to Nicholas and matriarch of the Young family. She inherited the Shang fortune, lives in a Euro-style palace that doesn’t show up on Google Maps (complete with secret service Burmese guards). Why: She is Hong Kong’s biggest diva, famously known as a stage and television actress. Her larger than life personality is very fitting to play the matriarch of the Young family.

Jamie Chung as Amanda Ling, a wannabe New York socialite who used to date Nick. Why: Chung is so gorgeous – and we’re sure she can do snarky well – so she’s perfect to play the posh and fashionable ex-girlfriend of a billionaire heir.

Michelle Yeoh as Eleanor Young, mother of Nicholas. Why: The Malaysian actress is well-known for playing strong leading women, but we think it’s about time she plays against type and takes on a challenge: playing the over-the-top, crazed mother who stops at nothing to end her son’s relationship with his Chinese American girlfriend.

Joan Chen as Kerry Chu, Rachel’s mother who works in real estate and harbors a secret past. Why: Kerry is the hard-working, resilient one of the cast and Chen can capture that perfectly. Chen is also a scene-stealer no matter what role she’s in, which is perfect for Kerry’s dramatic reveal.

Archie Kao as Edison Cheng, a successful private banker who is obsessed with being in the media spotlight. Why: Kao has a certain charisma that can get under your skin – in an effective way. We’re challenging him to play one loud, obnoxious and fame-whoring husband.

Charlene Choi as Fiona Tung, who comes from a politically connected family and has three children with Eddie Cheng. Why: Charlene Choi possesses a calm demeanor as an actress that’s effective in quiet moments, which is perfect for the role of Fiona, the wife who remains silent to her husband’s wild antics.

Nichkhun Horvejkul (of KPOP group 2PM) as Alistair Cheng, the younger, good-for-nothing brother of Eddie Cheng, with puppy-dog looks and who works in film production in Hong Kong. Why: The useless son with good looks? Thank goodness Nickhun is really pretty to look at.

Clara Lee as Kitty Pong, a gold-digging TV actress from Hong Kong with a penchant for skimpy outfits and who has Alistair Cheng whipped. Why: She’s one of Korea’s hottest sex symbols – we’d love to see her play a tacky, money-hungry soap star that shocks everyone at every turn. 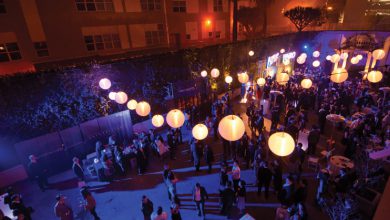 The party of the year is here! You’re invited to the exclusive after party of Audrey Magazine & KoreAm Journal’s annual gala, Unforgettable. What better way to end the year than by partying with some of the most […]