Daniel Dae Kim has stepped into the role of executive producer for three upcoming shows scheduled to air on various television networks.

Kim, best known for his roles on “Hawaii Five-0” and “Lost,” will be taking on the production of three pilots set to premiere this coming TV season, according to NBC News. He will be producing the shows from his CBS-based production company, 3AD.

The first show, “Exhibit A,” is a legal drama set to air on CBS based on the South Korean series “My Lawyer, Mr. Jo.” The show focuses on the journey of a scorned Korean American prosecutor who finds redemption as a defense lawyer, according to Deadline.

If the show – which has its pilot in development now – moves forward as a series, it would be the first U.S. non-action drama to have an Asian American lead.

The second show, which is currently being made for TV Land, is a comedy adaptation of “Re Jane,” a novel written by Patricia Park. The show follows the life of Jane Re, a hapa Korean American woman in New York who feels like an outsider in every aspect of her life, according to The Hollywood Reporter.

After losing her Wall Street job, she finds a new life as an au pair to the adopted Chinese daughter of two Brooklyn intellectuals. The series is described as “a fresh, witty and sexy look at life between two cultures and the importance of living for oneself,” according to The Hollywood Reporter.

Kim’s third project will be “The Good Doctor,” a medical drama based on a 2013 South Korean show with the same name set to air on ABC. According to Deadline, the show centers around a young Savant surgeon who is recruited into the pediatric surgical unit of a renowned hospital.

Kim, who recently using social media to talk about growing up as one of the only Korean Americans in a small Pennsylvania town, told NBC last year that Hollywood had a problem of diversity and representation toward minorities.

“The more that we can take control of the creative process, the less we will have to be begging the majority to give us roles, to give us work,” he said. 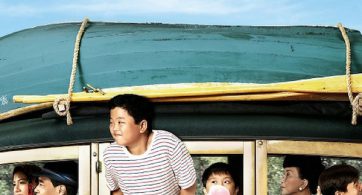 The third season of ABC’s “Fresh Off the Boat” premieres tonight in a special episode taped in Taiwan following last season’s cliffhanger ending. The show follows a family of […]