Congratulations are in order for Filipino American actor Darren Criss, who took home the award for Best Actor in a Limited Series or Television Movie at the 70th Annual Primetime Emmy Awards.

With his win, Criss becomes the first Filipino American to win an Emmy in the Primetime Lead Actor category, and only the second actor of Asian descent to win in any acting category, following Pakistani actor Riz Ahmed’s Emmy win last year for “The Night Of.”

Best known for his role on the hit musical television series “Glee” as the rambunctious Blaine Anderson, Criss’s cover of “Teenage Dream” became the show’s fastest-selling single and reached No.1 on the Billboard Digital Songs Chart back in 2010.

Today, the Fil-Am actor’s transition into the much darker and more serious role of Andrew Cunanan in FX’s “The Assassination of Gianni Versace: American Crime Story” proved to be a successful departure from his usual light-hearted character portrayals, as fans and critics lauded Criss for his versatility and commitment to the difficult role.

Fighting back waves of emotions, Criss took the stage to thank his brother Chuck, his father Charles, and his mother Cerina, who hails from Cebu, Philippines.

“Actors are really only as good as the moments they are given and the moments they are granted,” said Criss after thanking producer Ryan Murphy for taking a chance on him for the role. Murphy worked very closely with the actor during his tenure on “Glee” as the show’s creator and producer.

Before leaving the stage, Criss took the time to thank his fiancee, Mia Swier. The pair has been together for almost eight years.

“And to my darling Mia, you roll the windows down and pump the music up in my life, and I’m so lucky to have you,” said an emotional Criss as he left the stage, holding back tears.

Criss’s friends and former colleagues took to Twitter to congratulate the actor on his historic win.

Wowowee!!! Congrats to my old pal @DarrenCriss on his #Emmy win! pic.twitter.com/J0kg8YZZuM

To my insanely talent friend @DarrenCriss CONGRATULATIONS I’m so proud of you!!!! pic.twitter.com/EATZf6s0bb 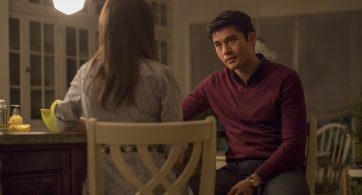 Henry Golding, who burst onto Hollywood just last month as the leading man of the box office hit “Crazy Rich Asians,” stars in another studio feature film this month—Paul Feig’s […]