From behind my laptop screen at Angry Asian Man headquarters, I sit at a relatively unique vantage point for what’s going on in the Asian Pacific American community. Having written this blog for over 10 years, a lot of information comes my way, and I try to interpret and share it as best as I can. Sometimes it feels like progress, other times it’s like 10 steps back. And, sometimes I just feel like throwing my computer out the window.

This year had its interesting share of ups and downs. Thus, I give you my blog’s top five “angriest” stories of 2011. Not necessarily the most controversial or even the most viewed posts of the year, but five noteworthy topics that struck a nerve with the APA community and got people talking.

Why Chinese Mothers Are Superior: The Wall Street Journal kicked off the year with “Why Chinese Mothers Are Superior,” a hard- ass Asian parent’s perspective on how to raise stereotypically successful kids. It was instantly controversial, like a lit stick of dynamite thrown into public discourse on parenting, Asian achievement and the imminent rise of China. The piece was actually an excerpt from Battle Hymn of the Tiger Mother, Amy Chua’s memoir about her humbling, unsuccessful attempt to raise her daughter the good ol’ Chinese way. I was deluged with messages from readers sending both the article and their own extreme stories of Tiger Parent upbringings.

Asians in the Library: It was the “ching chong ling long ting tong” heard around the world. When UCLA student Alexandra Wallace uploaded her racist webcam rant about Asians, the library and cell phone etiquette, she couldn’t have realized the kind of Internet fury it would unleash. But the response was swift and savage, and by week’s end, “Asians in the Library” had not only been viewed, shared, blogged and mocked across Asian America, dear Allie had dropped out of school. To say the video struck a nerve is an understatement. Her diatribe generated more traffic than anything I’ve ever published on the blog.

Japan, disaster and Facebook racism: We were all moved and concerned by the powerful earthquake and tsunami that devastated the eastern coast of Japan. As news reports poured in about the massive destruction and loss of life, it didn’t take long for legions of idiots to jump on social networks, often using some choice racial slurs, and somehow equate the crisis with “payback” for the bombing of Pearl Harbor and other World War II-related atrocities. For some, Facebook is nothing short of a communication revolution. For others, it’s just another means to express to the world that you’re an ignorant moron.

Han and Han: Fast Five, director Justin Lin’s immensely successful latest installment of the auto action movie franchise, treated us to the return of Sung Kang as Han—arguably the coolest Asian character in Hollywood. Yet in the span of the same year, we were also introduced to Matthew Moy in the CBS sitcom 2 Broke Girls—playing arguably the uncoolest Asian character in Hollywood—also named Han. During the casting process, someone slipped me an early look at the pilot script. I thought, “There’s no way this character could be as awful as it looks on the page.” It was.

Racebent again: The most hated movie on the Internet hasn’t even begun production yet. Want to incite fanboy rage? Mention the live-action big studio remake of Akira. The landmark anime classic, revolving around a group of Japanese teen bikers in dystopian Neo Tokyo, has been scrubbed to star mostly Caucasian actors. Hollywood white-washing certainly isn’t anything new, but the Internet has enabled fans to get angry much further in advance of a movie’ s release. And as I’ve learned with everything from the Dragonball franchise to The Last Airbender, and now Akira, hell hath no fury like a fanboy whose favorite property has been messed with.

This article was published in the December 2011 issue of KoreAm. Subscribe today! 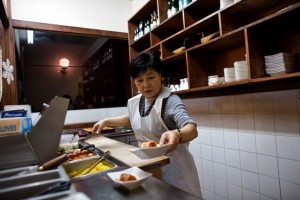 Restaurants Sour on Rules Over Kimchi Wall Street Journal Lidea Park, owner of Duck Hyang restaurant in Queens, says she makes kimchi with trepidation. Ever since she received seven […]