“Ghost In The Shell,” the Hollywood film based on a Japanese manga and anime movie of the same name, flopped in its opening weekend. The film had a budget of $110 million but only pulled in an estimated $19 million nationwide.

“We had hopes for better results domestically. I think the conversation regarding casting impacted the reviews,” Kyle Davies, domestic distribution chief for Paramount, told CBC News. “You’ve got a movie that is very important to the fanboys since it’s based on a Japanese anime movie. So you’re always trying to thread that needle between honoring the source material and make a movie for a mass audience. That’s challenging, but clearly the reviews didn’t help.”

When the news about actress Scarlett Johansson being cast to play as the film’s heroine — a major who leads a cyborg counterterrorist unit in a future world — was announced, many fans were upset, calling it a case of Hollywood whitewashing.

“Love ghost in the shell…. This I love not so much #EndWhiteWashing,” one Twitter user wrote in response to the news.

@io9 @MingNa Love ghost in the shell…. This I love not so much #EndWhiteWashing

In an interview with Good Morning America, Johansson said she thinks that the character is just a human brain living in a body-like machine. “She’s essentially identity-less,” Johansson said. “I would never attempt to play a person of a different race, obviously. Hopefully any question that comes up with my casting will hopefully be answered by audiences when they see the film.”

Deadline reported that the film is expected to lose at least $60 million based on the global projected revenue for the film. Sources say that — among other factors — bad marketing, delays, challenges with anime and manga adaptations, and the casting controversy are factors contributing to its current performance. 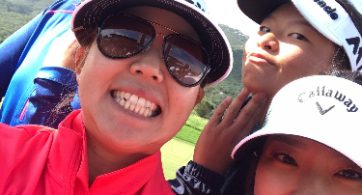 On Monday, LPGA pros came out to play at Journey at Pechanga with amateur teams and…for selfies? The ladies took to Thunder Par App throughout the day for score-keeping […]