The Marvel Cinematic Universe is back yet again, with another multiverse frenzy!

During an exclusive press conference on Sunday, May 1, cast members Benedict Cumberbatch, Benedict Wong, Elizabeth Olsen and Xochitl Gomez sat down with director Sam Raimi and screenwriter Michael Waldron to discuss the process of making “Doctor Strange and the Multiverse of Madness”. CEO of Marvel Studios, Kevin Feige, was also in attendance. The film will premiere on May 6.

The MCU has recently expanded with the miniseries “Moon Knight,” which premiered March 30 on Disney+, but “Doctor Strange and the Multiverse of Madness” will be the first Marvel film to hit theaters since box-office giant “Spider-Man: No Way Home” back in December. According to an article from Deadline, “Doctor Strange” is already well on the way to surpassing “Captain Marvel, ” “Guardians of the Galaxy Vol. 2” and “Thor: Ragnarok” in presales, with $150 million (or even more) plausibly on the way.

Although the film is already raking in dough, its cast and creators are more focused on the storytelling and how to push their characters forward. “These are great actors,” Raimi told moderator Jacqueline Coley during the conference. “They know what it’s like to be a human being. They’ve got a vast set of experiences that they’re not afraid to pull into their performances.”

Each cast member was asked about their expanding roles within the film. Cumberbatch shared that this new chapter will chronicle Stephen Strange’s self-exploration, rather than defining him as a leader. “This one is about finding his flaws, his faults, his humanity, as well as his strengths,” Cumberbatch said. “As far as a leader goes, this is more of a self-examination.”

The character of Wong (not to be confused with the real-life Wong, who plays him), began his journey as Strange’s right-hand man and is also ready for an evolution. “When I first took the job six years ago, we moved away from the old source material,” Wong said, possibly alluding to the racist stereotypes that can be found in the now-60-year-old original Marvel comics. “We developed and crafted this no-nonsense, midfield general librarian who’s continued through  four or five of the movies, and now is the no-nonsense Sorcerer Supreme. I love where we’re going with this and the character progression.”

Screen newcomer Gomez, who is debuting as America Chavez in the MCU, hopes she can bring some plucky energy to the big screen amid her veteran castmates. “There’s lots of adults in it; it’s very heavy,” Gomez said about the film. “I wanted to make sure that America still had that youthfulness and that fake-it-til-you-make-it resilience.” If the trailer is any indicator, Gomez has succeeded. Viewers can catch short flashes of Chavez in her iconic, denim-star-adorned jacket, confidently facing down various forces of evil.

“Doctor Strange and the Multiverse of Madness” is dedicated to genre exploration as much as it is to character,  however. Raimi brings not only his experience working on the Tobey Maguire “Spider-Man” trilogy to the table, but also his affinity for horror (see 1981’s “The Evil Dead” ). “When Kevin announced that this movie would be the first entry into Marvel putting their toe in the world of horror, I was thrilled that he called me to come in and talk about the possibility of directing,” Raimi said.  “I was able to take those horror films, what I had learned from them—building suspense sequences, titillating the audience—and that’s the stuff I was able to apply in the spooky sequences in this film.”

For fans of the MCU, this could be the film that pushes the fourth phase into completely new possibilities concerning story, character and genre. Olsen, referring to questions about the film’s link to previous Marvel projects like “WandaVision,” “The Avengers” and “Spider-Man: No Way Home” noted that “The story continues.”

Don’t miss out on “Doctor Strange and the Multiverse of Madness.” Check out the trailer below, and remember to catch the film in theaters (if they haven’t sold out) on May 6! 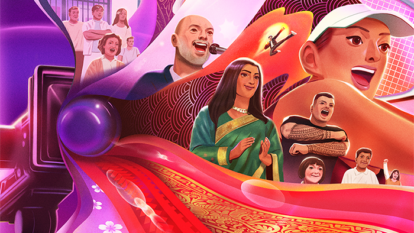 Take a peek at all of the Asian and Pacific Islander-led shows, films, documentaries and more streaming on your favorite platforms.