Do you remember the Korean drama Jumong? When the series aired on South Korean television in 2006, it had the highest ratings in the country, and won numerous accolades and awards. The historical drama centered on the journey of the titular character, Jumong Taewang, the founder of the kingdom of Goryeo. Maybe you knew all that. But how many of you knew that the series just came to a close last September in Iran? That’s right, the “Korean Wave” has landed on the shores of the Middle East. The drama, which aired on Channel 3, the third channel created by the Islamic Republic of Iran Broadcasting, was wildly popular among Iranians and had its fair number of zealous fans. There were even news reports of a young man who fell in love with the heroine Susano and committed suicide (or attempted to commit suicide) because his family refused to fund his trip to Korea. (Note: In Korea, there were also many unsubstantiated stories like this attesting to the show’s popularity.)

We know Korean dramas are not only popular in Korea, but outside of its borders as well. And you probably know a good number of non-Korean folks who are crazier about Korean pop culture than you are. And yet, Iran’s infatuation with the K-drama Jumong is a bit perplexing. Or is it? Maybe the two cultures have more similarities than differences. And maybe there’s more to it than the Middle East’s affinity to drama and conflict (as 2009 was especially tumultuous for the Persian-speaking state).

KoreAm asked Nahid Pirnazar, Ph.D., a professor of Iranian studies at UCLA, to shed light on this curious connection. Here’s what she had to say.

The characteristics of Korean culture that most strongly resemble her own, says Pirnazar, have to do with family and ethical values. “Many years ago, I came to the conclusion that there were a lot of similarities between Koreans and Iranians,” she says. “My children go to a private school in Los Angeles, and they had many close Korean friends. Their sense of family, the ethical values and moral restrictions…I found them to be all really similar.” Respect for elders and a sense of self-sacrifice were also qualities that Pirnazar thought were identical.

Korea and Iran also share some history. Iran, roughly the size of Alaska, borders the Gulf of Oman, the Persian Gulf and the Caspian Sea, between Iraq and Pakistan. Tehran is the capital and also the largest city in the country. In 1977, Gholamreza Nikpey, the mayor of Tehran at the time, visited Seoul to establish the two capitals as “Sister Cities.” To cement their relationship, Nikpey suggested that the two cities dedicate and name a street after their respective

“sister.” Teheranno (which translates to “Tehran Road”) is a street in the Gangnam district of Seoul. It has come to be known as “Teheran Valley,” Korea’s rendition of Silicon Valley, because so many Internet-related companies have adopted the area as their home. And in Tehran, there is a street named after Seoul. According to Korea’s Ministry of Foreign Affairs and Trade, there are 614 Korean nationals living in Iran.

Iran and North Korea also share the indelible mark of being included in George W. Bush’s “Axis of Evil.” The whole nuclear situation with

both countries has made Washington feel really uncomfortable, to say the least. Do they have weapons of mass destruction or not? We’d really like to know. And while Mahmoud Ahmadinejad and Kim Jong-il don’t look alike, they’re often described similarly (as evil and whatnot). And audiences cannot get enough of Andy Sandberg’s ode to the Iranian president on Saturday Night Live and Bobby Lee’s Madtv parody of the Dear Leader—both memorable for making the two seem more like cuddly characters than notorious dictators.

What other Korean exports would Iranians love?

If Iranians love our dramas, what else could they enjoy? According to Pirnazar, they will most likely relish our barbecue. “I myself really enjoy the grilled meats,” says the professor. Well, who wouldn’t? However, she notes, Korea’s appetite for pork is not likely to be adopted by the Iranians. That’s just too sad. What is life without the glory that is samgyeopsal (pork belly)?

It’s also unlikely that K-pop, especially the female artists, will ever get airplay over in Iran. But who knows? Iran is transforming before our

eyes, and 2009 will certainly be remembered for the protests against allegations of fraud that ensued after the last presidential election, the

“Twitter Revolution,” and the YouTube videos of Neda Agha-Soltan being gunned down and subsequently becoming a martyr for the cause. South Korea’s storied crawl toward democracy is no stranger to election drama, too.

Maybe Iranians will soon cram into noraebangs to croon a Wonder Girls tune, chew on galbi and chug soju with vigor. After all, who’s to doubt Korea’s far-reaching influence, impact and might? 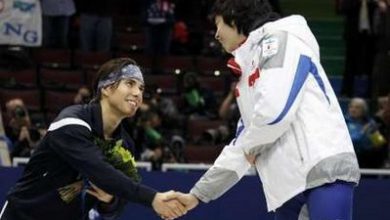 Just a few days into the Winter Olympic Games in Vancouver, and South Korea is leading the medal count in speed skating (not counting short track), with three medals […]