Los Angeles rapper Dumbfoundead partnered with Noisey for “Murals,” from his mixtape “We Might Die,” for which the music video was released this week.

The song was produced by Stereotypes, with Jay Ahn (who helmed the Korean American rapper’s viral hit “Safe” from earlier this year) directing.

The video shows the painting of a mural of Dumbfoundead on the wall of a Koreatown liquor store.

“‘Murals’ is an ode to all the past OGs and legends notorious in our neighborhoods,” Dumbfoundead said in a press statement. “As a kid I used to walk past these large murals and I always stopped to pay my respects as if they were actual memorials. I hoped that one day I’d also be immortalized on the walls of our liquor stores and bodegas.”

Dumbfoundead kicks off his We Might Die Tour in Seattle on Jan. 25. Visit http://www.dumbfoundead.com/tour for more information.

Watch the video below: 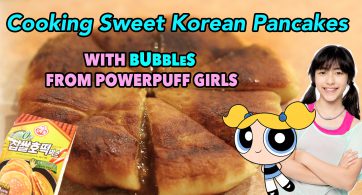 Kristen Li is The voice of Bubbles on the current reboot of “The Powerpuff Girls” on Cartoon Network. We invited her to come join us as we make hotteok, […]