After getting a quick glimpse of the beautiful beach weather that Cannes is known for on Friday, Saturday was full of storms and winds. But that didn’t stop crowds from lining up outside the theaters with their umbrellas to wait for today’s lineup of films. Perhaps the rain actually increased the popularity of the screenings, as festivalgoers preferred ducking in to theaters for shelter, as opposed to ducking into overpriced restaurants.

The day started promisingly with the premiere of Bends, a debut film from Hong Kong’s Flora Lau. The quiet drama starring Carina Lau as a wealthy Hong Kong socialite and Chen Kun as her mainland Chinese chauffeur with a pregnant wife was a nice surprise, but perhaps the quality of the film shouldn’t have been so surprising, because it was clearly accepted into Cannes without the boost of a known auteur at the helm.

While there was no Carina Lau (or… Tony Leung!) sighting at our morning screening, the two made an appearance at the evening gala, to the delight of Tweeting audiences in attendance.

On my way out of Bends, there was a crowd of photographers and fans gathering in front of the elevators at the Palais, one of Cannes’ main event venues. Knowing that the press conference for Like Father, Like Son was coming up this afternoon, I thought I’d try to get a glimpse of director Hirokazu Kore-eda, actor Masuharu Fukuyama, and the rest of the cast.

It wasn’t until I was already stuck in the middle of the crowd that I realized that everyone was actually waiting for Benicio del Toro to come out of the Jimmy P press conference. But I had nothing better to do, so I waited five more minutes to experience 10 seconds of Benicio del Toro’s anticlimactic walk to the elevator. Why not? I’m at Cannes. I got this excellent photo of the back of Benicio del Toro’s head, as he waved to the fans on the opposite side of the room, and learned that I would make one apathetic paparazzi photographer.

While the premiere of Monsoon Shootout took place the night before as the Midnight Screening, extra screenings were held today, in addition to their photo call.

Later at night, I would get my first lesson in the rules of attending Cannes gala screenings. The press badge gets you into most screenings pretty easily; you just have to make sure you go early enough, depending on how popular the film is. However, the red carpet gala screenings in the evening and night require an invitation as well as a strict dress code. For men, this means a suit and bow tie (there are street vendors selling bow ties for men who don’t have them; for women, it’s a bit more flexible, but most come in some sort of evening wear.

However, turns out black boots is a fashion no-no. When I reached the front of the line, the security guard looked me up and down, frowning. He told me to wait, as he got one of his colleagues to come over. The second man pointed at my boots and asked me if I had other shoes. He pointed to the words “Proper Attire Required.” I pointed at my black dress (definitely formal enough) and tried to tell him that the only reason I wasn’t wearing high heels was because it had been pouring rain the entire day. It’s not like I was wearing sneakers or flip flops. But he shook his head. “I’m sorry,” he said. “There is nothing we can do.”

In retrospect, this was fair. Pouring rain didn’t stop any of the other women from wearing their six inch stilettos. And even though I couldn’t believe I was turned away for my shoes after being so close to getting in, it was probably worth it just to have a Frenchman tell me there was nothing that could be done to rectify my poor fashion choices. 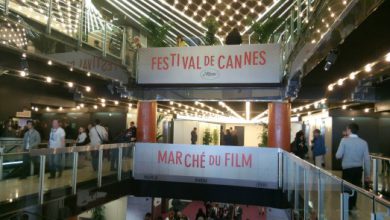 May 16, 2013: It’s my first time at the Cannes Film Festival, attending as a writer/editor on behalf of Asia Pacific Arts and Audrey Magazine. I’ve been told to […]