We trust that everyone has seen the new “Star Wars: The Last Jedi” trailer by now. As epic as it was, we saw no glimpse or mention of the new character Rose. That’s about to change — following a “Star Wars” panel in Orlando on Friday, all eyes are on actress Kelly Marie Tran.

Fans had been on the lookout for more information on Tran after John Boyega (who will reprise his role as Finn) referred to her as a new “lead” of the film last year during a documentary screening in the U.K.

Rian Johnson, writer and director of the film, confirmed Tran’s meaty role in Orlando Friday at a “Star Wars” panel, saying that she will have the “biggest new part” in the pic.

Rose is a Resistance maintenance worker who was born from the idea that “any of us could step up and become a hero,” Johnson said, at an event attended by Tran, George Lucas, Mark Hamill and Harrison Ford.

“She’s not a soldier, she’s not looking to be a hero and gets pulled into a big adventure with Finn,” Johnson said at the panel.

Hamill, meanwhile, said of Tran: “If she were any cuter, she’d be an actual Disney cartoon.”

Information-hungry “Star Wars” fans first encountered Tran’s name last year when an allegedly leaked scene description made its way to the International Business Times, which reported on a scene involving her character and John Boyega’s Finn inside a bar.

The speculation was that she was an information broker selling intelligence to bidders. In the scene, Rose helps Finn escape trigger-happy Stormtroopers by leading him out of the bar through a back door.

We won’t have definite answers until the film hits theaters in December — and it seems the same applies to Tran’s family, who was kept in the dark about her involvement in the film until months after she joined the project. “I told them I was doing an indie movie in Canada,” she said at the panel. “At one point, I actually got some maple syrup so I could bring it back to them so they actually thought I was in Canada.”

Tran is an Asian American actress whose credits to date — most of them comedic in nature — include appearances in “CollegeHumor Originals,” “Ladies Like Us” and “Gortimer Gibbon’s Life on Normal Street.”

Why not watch it again (and again, and again)? Here’s the first look at “Star Wars: The Last Jedi”: 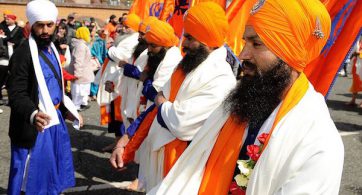 Happy Vaisakhi! Today is the start of the Sikh New Year. The religious festival marks the beginning of a solar new year for Sikhs and Hindus, and commemorates 1699 […]