Here are some exclusive interviews with the cast of Seoul Searching.

Justin Chon as Sid Park, a punk who has problems with authority. He doesn’t want to be in Korea that summer, and his perpetual scowl shows it. But while Sid’s clothes and sneer signal “tough guy,” they serve to cover up his own insecurities and yearning for his father’s acceptance back home.

“As a Korean American, you really had to have a definitive identity. Otherwise, you kind of get lost from the pack. There was more of an innocence in the ’80s among second-generation Koreans,” Justin Chon tells KoreAm.

Jessika Van as Grace Park, whose provocative style of dress and come-hither look draw every guy’s attention, and she doesn’t hold back when it comes to toying with their emotions. The teenage boys at the Seoul summer camp—in particular, Sid—don’t stand a chance against Grace, who channels an ’80s Madonna at the height of her sexual prowess.

“When I read the script, I could really relate to Grace because I feel like I grew up maybe not dissimilar to other Asian girls in America, or even in Asia. There’s a lot going on underneath that we feel we need to cover to stay safe, because we’ve grown up in families where showing pain or vulnerability or showing weakness isn’t thought of as a good quality,” says Jessika Van.

Esteban Ahn a.k.a SanchoBeatz, as Sergio Kim, a fun-loving party-boy from Mexico, who attends summer camp for the beautiful girls and booze, and he does his best to get his roommates—the sour-faced Sid and the solemn Klaus—to follow along on his adventures.

Teo Yoo as Klaus Kim, a Korean German who arrives at camp with other things on his mind—namely his girlfriend back in Germany and future career. His parents own a small business back home and want their son to take it over, but he has his sights on bigger dreams.

“All of the characters have their unique struggles. They are kind of symbolic for situations that I have been through in my life—not to that extreme extent, but certain situations that gyopos can relate to, especially [those concerning] father issues, simply because of the generational changes and the diversity of the next generation,” Teo Yoo says.

Byul Kang as Sue-Jin Kim, one of the toughest students at camp–she’s not afraid to talk back or throw a kick at any guy who messes with her.

“Time period-wise, it’s set in the ’80s, but it’s a high school class. I think everyone remembers, especially in high school, college and even as a young adult, trying to find that sense of who you are—your place in the world. I think that’s what resonated with me the most because you see all the insecurity,” says Albert Kong.

Rosalina Leigh as Kris Schultz, an adoptee who comes to the summer camp with a larger purpose than to just learn about Korean culture.

“She had never acted before in her life,” Benson Lee tells KoreAm. “But she just had an inkling for acting. When I saw her audition tape, I was blown away. She was as good in the audition as she is in the movie. I was like, wow, this girl’s a natural actor.”

Cha In-Pyo as the no-nonsense Mr. Kim, the head counselor of the summer camp.

“When I went to college in New Jersey, which was about 25 years ago, I had Korean American friends who had the same problems as the characters have in the movie. Seeing them not being able to communicate with their parents, I remember I felt compassion for my friends,” Cha In-pyo tells KoreAm.

REVIEW: Justin Lowe, The Hollywood Reporter
“Powered by an instantly recognizable, dance-happy soundtrack and a charismatic cast turned out in memorable period costuming, Lee’s most accessible film yet looks poised to capitalize on enduring 80s nostalgia and a refreshingly appealing premise that could see the film crossing over from niche bookings to much broader appeal.”

Wired interviews the director and cast of Seoul Searching
“I have a large ensemble cast and there’s not too many Asian-American actors out there compared to other groups,” Benson Lee tells Wired. “I decided I could probably open up my choices if I did it online. So I thought of the most popular online platform, which is Facebook.”

REVIEW: Josh Terry, Deseret News
“The Sundance press guide paints ‘Seoul Searching’ as a loving tribute to ’80s pop culture and the films of John Hughes, and that affection is obvious. But the final product is far too flawed to do its inspiration justice.” 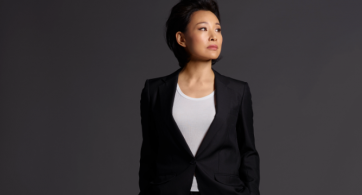 Netflix’s elaborate original series Marco Polo was met with some criticism from the Asian American community for being an outsider’s fetishization of the East. But actress Joan Chen urges […]