Over coffee and cronuts in Los Angeles’ Little Tokyo, Hasan Minhaj proudly talks about how his father convinced his mother to marry him within 10 minutes of meeting her, and to move from Aligarh, India, to Davis, Calif. It’s a great story about having the confidence to make one’s dreams happen, and one that Minhaj has obviously taken to heart. The articulate and charismatic 27-year-old comedian and actor has successfully managed his stand-up comedy career with his breaks into television, most recently wrapping his first season of hosting Failosophy, an MTV show on Internet fails and memes.

Minhaj discovered his love for comedy in 2004, during his freshman year at the university of California, Davis. His fellow students were going crazy with high-speed T3 lines and peer-sharing applications like Kazaa and Limewire. People would have hard drives filled with movies and that was how, at a friend’s apartment, he first viewed Chris Rock’s stand-up show, Never Scared.

He recalls: “I had never seen stand-up before, and he talked about being racially profiled and loving hip-hop and everything. I thought, ‘Oh, this is the Truth! Someone gets to call bullsh-t, and that’s what’s making everybody laugh.’ It came at such a telling time in my life when there were so many things I wanted to call bullsh-t on. All the bullies that bullied me. [Chris Rock] was able to talk about really heady things like politics and race, but make it so palatable to everyday life. And to me, that was the most empowering thing.”

Minhaj jumped straight into stand-up, making regular drives from Davis to San Francisco to work on his craft in the booming comedy scene there. “I was able to learn from comics of all shapes and sizes – Asian, black, white, gay, transgender, everything. Kevin Shea, W. Kamau Bell, Arj Barker – these guys were all inspiring to me because I saw comedy that could be different from what you’d see on HBO.”

In 2009, Minhaj moved to Los Angeles for NBC’s Stand-up for Diversity, a showcase program designed to launch the careers of comedians of various ethnic backgrounds. Despite finding representation, Minhaj, along with his South Asian and Middle Eastern comedian friends, would run into a common problem in Hollywood: stereotypical casting sheets for Asian men, like “Vikram, 25, dickless, docile, afraid of girls.” “In all those scripts, us pulling the girls was the punch line,” he says. “The humor was in the fact that we were getting a girl. I mean, a guy not being able to get a girl is funny, but not by virtue of his ethnicity. It creates this notion of beauty that Asian men aren’t cool, hip or sexy. It just made me mad.”

This was the genesis of Goatface Comedy, where Minhaj and his friends could play leading men in their own sketches, where their ethnicities weren’t the punch lines. If they couldn’t be cast as superheroes, news anchors or shootout cops, then they would create their own content. “Let our sense of humor bust through any barrier or stigma that Hollywood casting has put upon us,” he says, reflecting on Goatface’s ethos.

Minhaj’s sketch work on Goatface and his offshoot web series, The Truth, garnered the notice of several producers, and soon he found himself on television. His work has ranged from being the first South Asian comic on Chelsea Lately to doing improv work on MTV’s Disaster Date to being a series regular on ABC Family’s State of Georgia. The irony that on Failosophy he and other comics provide commentary on social media failings is not lost on Minhaj, who got the gig through his posts on YouTube.

Regarding social media he says, “It’s a gift and a curse. It’s democratized entertainment, in the sense that if you don’t fit into a circle or square peg, there’s a peg for everybody. If you are really into one particular niche, the Internet is for you. The problem is , like anything else when it first came out, like video games or cable TV, it’s a huge distraction.”

Early this year, Minhaj became involved in Stand-up Planet, a documentary TV show funded by the Bill and Melinda Gates Foundation. He traveled to Mumbai, India, and Johannesburg, South Africa, to see how the comedians there could use their talents to have a conversation about issues.

“I got to see the way they use comedy to affect social change,” he says enthusiastically. “Like in India, 54 percent of the people still go to the bathroom outside, while 60 percent have cellphones. So more people have cellphones than toilets. And this comic there had a great joke about how he’d see a guy squatting by the train tracks, dropping a deuce while swiping on a smartphone. It’s funny, and it brings levity to this social issue. And that’s it to me. That’s what makes me love comedy.”

As part of the program, Minhaj and the other performers visited with Bill Cosby, a mentor on the project. This sparked an idea about where Minhaj wanted to take his comedy next.

“Meeting Bill Cosby was one of those life-changing moments,” he says. “He’s one of the grandfathers of modern comedy. You know, he transcended race. Before we had a black president, we had Bill Cosby as America’s dad. I sat with him, and his ethos was that he doesn’t curse or talk about filth because he wants us all to be better than that, to be better than the expectations that are placed on us. He wanted us to be funny on our own and not be a victim of our situation. It really hit me. How do I walk that line of wanting to speak the truth, but not playing the victim? I think that’s the next chapter for me. I wanna be universal to everybody, but I also wanna say, ‘Hey, lemme tell you about where I came from.’ I think that’s the journey of stand-up.”

Next up, you’ll find Minhaj and the rest of Goatface working on a live tour of their sketches and pitching a television variety show. They’re hoping to change the face of television, literally. In his spare time, Minhaj is looking for inspiration all over L.A. “Seeing an artist on a small stage just before their big break is exciting. L.A. has so many great neighborhoods and events. There are so many amazing people here just coming together and collaborating on projects, like at Best Fish Taco, where people are crammed in a cabana to listen to comedy. That’s just so cool to me.” 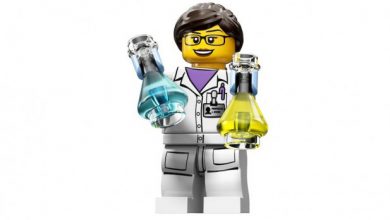 We can all let out a collective cheer for one of the newest additions to the Lego family. Professor C. Bodin, according to her name tag, is Lego’s first […]