When Kristen Kish arrives at our meeting place, the rooftop lounge of a five-story hotel just steps away from the sands of Venice Beach, she looks more rock star than chef, her lithe frame in jeans, T-shirt, boots and leather jacket, and her cropped hairdo impeccably coiffed. And despite the gusty sea breeze blowing continuously over the next 30 minutes, those short strands deflect any attempt at disarray.

She didn’t let being voted off stop her from winning Top Chef earlier this year. Kish became the first contestant on the Bravo cooking competition to be eliminated and then come back via the show’s version of the loser’s bracket, called Last Chance Kitchen, to claim the title.

There was one thing, however, that Kish notes as a bit of a disappointment. “In my head, I thought I would look more like a badass [than I actually looked on TV],” says Kish, with a laugh.

But she did become only the second female named Top Chef over its 10 seasons. “Maybe why I fared well is that I didn’t look at it as a competition [against other chefs],” says Kish. “I looked at it more as a competition with myself.”

That is still some tough competition because Kish considers herself a perfectionist, someone who refuses to slack off. “I put a lot of pressure on myself to succeed in some way,” she says.

She was also adamant about not falling for this reporter’s repetitive questions trying to probe the psychology of being adopted from Korea at the age of 4 months. “I never felt like an outsider. I always felt so included,” says Kish. “The whole perfectionist thing comes from somewhere I can’t [explain]. I wish I could figure it out. [It’s not like] it’s because I was adopted and I feel I have more to prove. But whether it’s true or not, I don’t know. I just think in cooking, I just want to make things perfect not only for me but for my guests.”

Being driven and passionate about serving others is just a part of who Kish is, she insists, a product of her personality and her upbringing by nurturing parents in Michigan.

She might find out how much of nature factored into the person she’s become in the near future, when she plans to visit and immerse herself in the country where she was born. Of course, food will play a big part. “I want to eat my way through Korea so badly,” says Kish. “I love Korean food.”

Finding her birth parents, on the other hand, won’t be a part of the trip. “I have no desire to meet [them] only because it’s not realistically an option for me; there’s no record,” says Kish. “What I want to do, though, is to go to the village where I was born, and spend X amount of days or weeks or whatever it may be in the trenches, doing what [the locals] do there. That’s going to bring me more gratification than if I were to meet my birth parents.”

She hopes to travel before the end of the year. In the meantime, her priority will be a new job: running the kitchen at Menton. Her post as chef de cuisine of the Boston restaurant was in the works before she won Top Chef. “[Menton] is fine dining; it’s beautiful, perfect service, perfect food. It’s just my style. I love that formality of dining,” says Kish. “I’m not a rustic, farm-to-table kind of girl.”

And operating a fine dining establishment of her own is what she envisions in her future, not being a celebrity chef on television. “I want to cook,” says Kish. “I want to be in a restaurant.”

And still looking every part the badass in the kitchen, no doubt, every hair firmly in place. 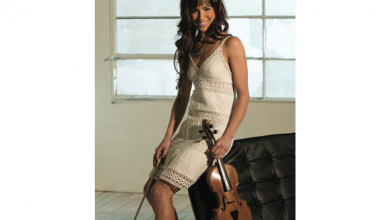 Meet the multi-hyphenate musician who can “throw down and do a hoedown” with the best of ’em, from Keith Urban to The Voice‘s latest champ. Story by Jimmy Lee. […]