Chloe Kim gets air at the women’s snowboarding superpipe final at the Dew Tour iON Mountain Championships on Dec. 14, 2013, in Breckenridge, Colo. She placed third.

Up In The Air

Young snowboarding star Chloe Kim is not old enough for this year’s Olympics, but has her sights set on Pyeongchang in 2018.

by STEVE HAN
Five years ago, Jongjin Kim spotted professional snowboarder Soko Yamaoka at a famous resort in the Swiss Alps. Chloe Kim, his 8-year-old daughter, had been competing for two years, and he wanted her to pick up a few tips by watching Yamaoka, who finished 10th at the 2006 Winter Olympics in Turin, Italy.

As he watched Yamaoka riding, just one question came to mind: “That’s it?”

“Obviously [Yamaoka] looked great,” the 57-year-old father of three recalls in an interview withKoreAm. “But watching Chloe all these years, I expected something extraordinary since she was an Olympian. I couldn’t help but wonder if that’s all it took to compete at the Olympics. I really felt like my daughter would be just as good.”

In fact, many in the snowboarding  community had already tagged 13-year old Chloe as a prodigy before she turned 10. The California native started competing at age 6 on a mini snowboard that cost just $25. Only a year later, she won two gold medals and three silver medals, finishing first overall at the United States of America Snowboard Association’s 2007 National Championships in the 6- to 7-year-old age group.

Based on her accomplishments this season, Chloe would have qualified for the Winter Olympics in Sochi this month, but she is ineligible due to the age minimum of 15. But she is more excited than disappointed because the goofy-footed rider is on track to make her Olympic debut in her parents’ native country of South Korea, at the 2018 Winter Olympics in Pyeongchang.

More than anyone, Chloe’s family is excited and proud about her rapid rise. When KoreAm Journal’s website, charactermedia.com, posted a brief article about her success at the Dew Tour iON Mountain Championships last December, her family and friends jumped all over the blog post, immediately sharing the story on Facebook and tagging her mother. When KoreAm invited her for an interview at its office in Gardena a couple of weeks later, Chloe arrived with an entourage that included her parents, sister and aunt.

At first glance, Chloe clearly has the look of an athlete. Listed at 5-foot-2 and 115 pounds, she sports a very athletic build for her age. But it didn’t take long for her junior high sensibilities to take over, as she couldn’t stop munching on cookies laid out by KoreAm staff. When asked if she realizes how good she is, Chloe answers, “Oh, most of the time. When I’m done, I’m just like, ‘Wow, I’m really good at this.’”

It’s hard to accuse Chloe of being overconfident. After all, snowboarding is second nature to her. Born in La Palma, Calif., in April of 2000, she says she didn’t even like skiing or snowboarding when she started at age 3. But she kept on snowboarding for one reason: she couldn’t stop winning.

“I didn’t like it at first,” Chloe says. “My dad took me with him so I was just there. But winning and seeing what I could actually do and making new friends, I started liking it more.”

The Kim family, currently living in Torrance, a suburb in Los Angeles County, still believes it’s something of a freak accident that their daughter, the youngest of three girls, is so athletically gifted. While her father has snowboarded avidly since his 20s, he was far from even a decent athlete. His dream, he says, was to go down a run just once without falling and seriously hurting himself. He even once asked his wife, Boran Yun, to put his helmet in the coffin alongside him if he ever died from a snowboarding injury.

“I just wanted to ride something on the snow,” says the father. “But I never got better since the day I fell on my head immediately after I put on a snowboard for the first time.”

Yun also was never a big fan of snowboarding. When she realized that her husband had his heart set on continuing in the sport, she gave up making weekend trips to Big Bear or Mammoth Mountain with him. That’s when Kim started taking their 3-year old daughter, in the hope that would force Yun to come along. Much to his surprise, he found Chloe to be a natural and soon struggled to keep up with her on the slopes.

Only two years later, the snowboarding team coach at the Mountain High resort near Los Angeles saw Chloe snowboarding and immediately asked Kim to let her join the team. Little did the instructor know that Chloe was too young to start competing since the minimum age was 6. (Sound familiar?) But she joined the team a year later, and the rest is history.

“She is one of the best young riders I’ve seen,” says Kelly Clark, the renowned women’s snowboarder, who won gold at the 2002 Winter Olympic Games in Salt Lake City and bronze at the 2010 Games in Vancouver in women’s half-pipe, in an interview with KoreAm. “And knowing her, I think she has the potential to live up to the hype.”

Chloe, competing at an event at age 6. Photo courtesy of the Kim Family.

Chloe’s father says sometimes its hard to fathom how his daughter has managed to become one of America’s top snowboarders.

In order to support Chloe, Kim quit his job as a real estate investor about five years ago. Chloe’s mother has been working for Korean Air for more than a decade and admits the company’s strong health plan is essential for her daughter and her frequent injuries.

Does Chloe feel pressured from seeing her parents sacrifice so much for her?

“It’s more thankful [than pressured],” she says. “There’s always more pressure from competing. I feel like I need to work harder, just because they’re doing this and sacrificing for me.”

Chloe has also had to make her own sacrifices. After attending La Palma Christian School through the seventh grade, she recently began taking classes online since it was impossible to maintain an ordinary academic schedule. For a 13-year-old girl, being separated from friends has not been easy, but this isn’t the first rough transition for Chloe. Before she started the third grade, her parents sent her to live with an aunt in Geneva, Switzerland, for two years so she could learn French.

At 7, Chloe struggled to learn a different language and culture at first, and spent most of her day indoors hanging out with her pet rabbit.

“I wanted to stay home,” she says. “I didn’t want to go out and go to a new school and meet new friends, you know, just because they speak another language. The first year, it was pretty bad, just because I couldn’t communicate with other kids.”

But soon, Chloe adjusted to life in Switzerland and started making friends. “So I ended up liking it,” she says. “Oh yeah, and you don’t go to school on Wednesdays there. That was fun. I would just do nothing!” Today, she can proudly say she’s trilingual in English, Korean and French.

Although Chloe seems primed to become the next big star in snowboarding, she understands that there are no shortcuts. She and her family are also being cautious about getting ahead of themselves for a good reason. Kim has already dealt with a series of brutal injuries. Since suffering a severe facial injury at age 7, she has had a shoulder separation, a broken finger, a broken arm, several knee injuries and a back injury that left her bedridden for almost two months.

However, Kim says she isn’t afraid of getting hurt. “I’m just having fun. You just have to take risks sometimes. I don’t think about that. It’s just, like, let’s get it over with. If you keep thinking about injuries, it’s easier to get hurt, just because you’re thinking about it so much and not concentrating on what you’re doing.”

Her parents don’t share her fearlessness, for obvious reasons.

“Every time my phone goes off [when Chloe is out practicing], I feel like my heart is exploding,” Chloe’s mother says. “She used to go to the emergency room probably about three, four times a year. Nowadays, my husband makes sure she stops when she’s feeling tired. So she hasn’t gotten hurt in the last two years.”

“It is scary to watch her sometimes,” her father says. “So I help her set goals and targets, but leave the rest to her and the coaches.”

Chloe has shown enough talent to compete with the world’s best. Her 15 feet of amplitude (the height of the maneuver) is already among the best in women’s snowboarding.

But her father insists that there’s so much more to come from her. Chloe mostly competes in half-pipe, but wants to improve in slopestyle, basically a jump course that makes its debut as an Olympic sport at Sochi. Reigning gold medalists Shaun White and Torah Bright are expected to be the only athletes competing in both disciplines in Russia.

“Chloe can also pull off most tricks that are used exclusively by the top-ranked snowboarders, but we just want to be mindful of when she should start using them in competitions,” her father says. “So as things stand now, we’re actually happy that we’ve got the likes of Kelly Clark and Torah Bright above Chloe. They’re the best in the world. But the plan, once Kelly Clark is done with this year’s Olympics, is to start Chloe’s era.”

Chloe’s talent is already so apparent. Last month, she became the youngest medalist in the history of the X Games Winter events, finishing second behind Clark.

Looking ahead to Pyeongchang in 2018, both Chloe and her family understand what it would mean for her to become a dominant force in snowboarding as a Korean American. Talented snowboarders have come sporadically out of Japan over the years, but an Asian American snowboarder, particularly a female, is rare.

“You have to realize, we live in a day and age where we see Asian Americans everywhere now, but in women’s snowboarding, especially in America, Chloe is just about the only one. We are extremely proud,” Chloe’s father says. “For our family to come here as first-generation immigrants and have Chloe leave our family name in history, I feel like we’re completing our mission as  immigrants in this country.” “When I’m done, I’m just like, ‘Wow, I’m really good at this.’” 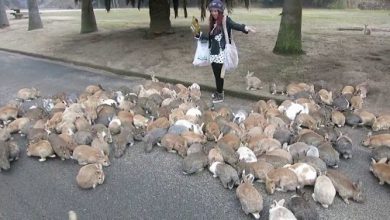 In Japan, the island of ÅŒkunoshima has become a well-known tourist attraction. However, the popularity of this island may not be for reasons that you would typically expect from […]