Growing up as an Asian kid in suburban Maryland, all Antonio Cuna would do was skate around and play in rock bands. With an all-black wardrobe that consists of band tees and Vans, unchanged from his high school years, Cuna has always kept a little “emo” in his heart — but that doesn’t mean he’s always making “emo” music.

“It was good growing up in Maryland and embracing music because that was the only thing I did that I thought was fun,” Cuna said. “I stayed away from drugs and all that stuff.”

The Filipino American electronic dance music producer and DJ may have picked up instruments first, but it is the remixes and beats he makes under the moniker Sweater Beats that has caught the attention of the EDM world. Last year, he signed to Big Beat Records, which counts on its roster David Guetta, Galantis, Skrillex and Clean Bandit.

But Cuna was just a humble kid who came from the Philippines with his family when he was 8 years old. Growing up, music was always around. Everyone loved karaoke; his father played bossa nova on the guitar; and thanks to his sister’s songbook, the first song Cuna ever learned on the guitar was by NSYNC.

Cuna left his small hometown of Rockville, Maryland, for college in New York City. Friends introduced him to electronic music and he fell in love with the beats that played in local discotheques and the sounds he’d “sweat,” or copy, from other artists. “I used to go by ‘I Sweat Everybody’ because, when I was learning how to make beats, I’d think I want to ‘sweat’ that guy, an East Coast term meaning to ‘jack someone’s style,’” Cuna explained.

Describing his music as “loud, bassy, positive music” that makes you feel “warm and fuzzy on the inside,” much like a sweater, Sweater Beats’ 2017 single “Glory Days,” which features fellow Asian American singer-songwriter and actress Hayley Kiyoko, is all about letting go and living in the moment. The single is also Cuna’s music video debut, which features an all-Asian cast that pays homage to the iconic karaoke scene of Scarlett Johansson in the pink wig in the 2003 film “Lost In Translation.”

“In the dance world, we’re definitely the minority,” Cuna said of Asian American representation in music. “But there’s so many Asian fans,” he continued, pointing to the strong fan base that regularly show up at electronic music and R&B clubs in Los Angeles. “My idol was James Iha from The Smashing Pumpkins, and I just want the people in the audience to have another Asian person to look up to and say, ‘I can do that, too.’”

Cuna joined fellow Asian American electronic music producer Charlie Yin, better known as Giraffage, on a 26-city nationwide tour in fall 2017. They’re on a mission to highlight more Asian Americans in music. “It’s important to have people in music and media that look like you,” Yin said. “Growing up, my favorite band was Thrice, probably because one of their guitarists is Asian. If I didn’t have that band to look up to, I might not have had the confidence to pursue music myself.

“It’s cool that Asians growing up in 2017 can see other Asians like myself and [Cuna] doing cool music things,” Yin added. “We’re still somewhat of a rarity, but there’s definitely way more Asians in the spotlight than there were five years ago.”

Sweater Beats has gained momentum in the EDM world ever since his move from the East Coast to Southern California two years ago. “I’m in a good place right now, and I just want my music to have a positive message to the people that listen to it,” he said. “My whole life I’ve just wanted to make sad songs, but [now] I want to make people feel jazzed about life.”

Sounds like Cuna is paving the way for us all to live our glory days. 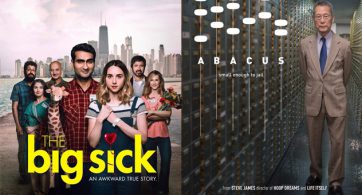 The Academy of Motion Picture Arts and Sciences released its nominations for the 90th Academy Awards, and Kumail Nanjiani and Steve James have each received a nomination for their […]