Ripped straight out of the pages of Marvel Comics comes a dizzying blitzkrieg of robotic action and San Fransokyan lights, as Big Hero 6 illuminates the big screen on Nov. 7. But, while the 54th successor in the series of Walt Disney Animated Classics may borrow its title and majority of its cast from the Marvel miniseries, the film is only loosely based on the obscure comic books, which were set in Tokyo and centered on an entirely Japanese team of superheroes. For better or worse, the adapted tale, co-directed by Don Hall (Winnie the Pooh) and Chris Williams (Bolt), bears the signature of Disney and all the storytelling gimmicks that come with it, and yet the finished product is definitely anything but a mere amalgamation of clichés.

This superhero adventure follows too-cool-for-“nerd-school” Hiro Hamada (Ryan Potter), who at the ripe old age of 14 is a robotics prodigy with a penchant for illegal bot fighting. Hiro’s volatile mix of borderline criminal genius and teenage dirtbag attitude has big brother Tadashi (Daniel Henney) frequently leaping to the rescue on his Vespa. But as with many hero origin stories, our young protagonist can’t rely on the crutch of his protector forever. Tadashi takes his brother for a visit at the San Fransokyo Institute of Technology, whereupon the initially scornful Hiro becomes enamored with the stimulating, innovative environment, and especially of Tadashi’s mentor and robotics department head, Professor Robert Callaghan (James Cromwell). It is there that he is also first introduced to Tadashi’s masterwork, health care robot Baymax (Scott Adsit), who looks like a hybridized incarnation of Totoro and the Michelin Man.

Big Hero 6 is set in the fictitious San Fransokyo, a melding of San Francisco and Tokyo.

Hiro’s character development hits the ground running as he becomes motivated for the first time in years to take on new and uncertain challenges starting with the SFIT showcase, an event where promising young scientists are evaluated for a shot at admission. Modeled on his old fighting robot, Hiro presents his microbots, minute metal pieces that, with the guidance of a neurotransmitter and extensive imagination, hold “limitless applications.” Though the invention awards Hiro both the limelight and acceptance to the program, the joy of achievement is short-lived when a sudden conflagration breaks out at the showcase, resulting in the explosion that claims the lives of Professor Callaghan and Tadashi, who rushes back into the building to save the professor.

In the aftermath of the tragedy, as Hiro is left grasping at the ashes of the life he had envisioned, Baymax is activated and makes it his personal mission to “improve” Hiro’s “emotional state.” This clumsy interaction leads to the discovery of an unclear but decidedly sinister plot involving the mass production of Hiro’s previously thought-to-have-been destroyed microbots, spearheaded by a shadowy individual whose identity is concealed behind a kabuki mask. The apprehension of this figure, who is later linked to the murder of his brother, drives Hiro on a reckless path for justice and vengeance.

And though Baymax cuts an impressive bulk, here is where the rest of the team comes into action, as foils to Hiro’s journey, as well as each other’s. As friends of Tadashi and disciples of Professor Callaghan, each member of the team has a stake in the hunt for the masked villain. The ever impatient and stoic GoGo Tomago (Jamie Chung) is the first to join figurative hands with Hiro in this mission, which impels the others—Honey Lemon (Génesis Rodríguez), a vibrant sweetheart with a knack for concocting neon-hued explosions, Wasabi (Damon Wayans, Jr.), whose intelligence and sarcastic approach to thrilling heroics bears a fond resemblance to Nickelodeon predecessor Sokka (Avatar: The Last Airbender) and self-professed “science enthusiast” Fred (T.J. Miller), who aspires to become a fire-breathing lizard. This hodgepodge of quirks and temperaments adds up to a neat, Disney-stamped balance of clashes that always manage to soften into heartwarming resolution. And a large part of the film’s charm is owed to the vocal talents that roll seamlessly off the animated tongues of the cast, each actor in perfect symbiosis with his or her character.

But while Big Hero 6 boasts a visually tantalizing palette to match a charming core in the great bounds Disney can be counted on to advance in its animated features, there were places where it failed to break new ground and, in some areas, even stepped backward. It was a shame to see the writing play it safe by falling back on well-trod devices that have brought success when it comes to both Marvel universe action and Disney/Pixar “feels,” but it rang more like a well-loved neighbor and less like a whole new world of excitement. The plot strides from start to finish like a veteran actor on a stage, but in this production, the marks on the floor that shout, “Now stand here and say this,” are visible to those watching—which seems to become more and more noticeable with each step Disney takes into 3D computer animated films.

Diverging from the all-Japanese team from the original comic book series, Disney’s iteration of the Big Hero 6 team is racially varied. Several members—including the biracial lead character of Hiro, who is half Japanese—are presumably people of color, and that diversity was refreshing to see in a big studio animated film. But what’s disappointing is that there seems to be no acknowledgement of race, at least insofar as adding some depth to the characters’ backgrounds.

Nevertheless, Big Hero 6 is certain to win the audience over with a nonstop offense of some of the most likable characters the studio has presented within the last few years, and parents will likely be pleased to find that their kids are more receptive to moral lessons and health tips when they come from an adorably oversized robot.

When Tadashi says of his creation, “He’s going to help a lot of people,” it creates a ripple effect, blurring the juxtaposition of Hiro, Tadashi and Baymax, and their roles as keeper and charge, caregiver and receiver, as well as the meaning of family, throughout the unfurling narrative. Although Disney and sister studio Pixar go heavy-handed with tug-on-your-heartstrings motifs that don’t always translate organically from screen to audience, Big Hero 6 and its interpretations of the different forms of family, from the brothers to single parent Aunt Cass (Maya Rudolph), the team and even a ginormous robot, present a simple and clean range of emotions to which viewers from all walks of life will be able to relate.

At the very least, the film is a must-see in theaters for the vicarious thrills when Baymax zooms over the exquisitely conceptualized San Fransokyo skyline. Overall the movie rolls along like an extended pilot for a series, not unlike the DC Animated Universe’s Justice League, and it appeared determined to set up distinct characters and a taste of the thriving franchise to come. By the film’s end, the audience is already anticipating the next chapter. To be continued next week, right? If only.

Here’s the trailer from Big Hero 6: 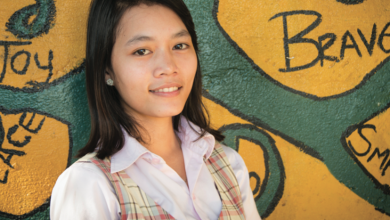 “I wanted to be a social worker,” says Sokha Chen, “but now I’ve decided I would rather study business so that I can set up a nongovernmental organization […]