Last year, So Yun Um’s “Liquor Store Babies” traveled the festival circuit up and down the West coast. Now the Korean American filmmaker is looking to turn the short film into a feature-length documentary.

“Liquor Store Babies,” which premiered at the 2018 Los Angeles Asian Pacific Film Festival, follows director Um and her friend, Danny Park, whose families own liquor stores in Los Angeles, as they discuss their childhoods and aspirations in personal conversations. The film is just five minutes long, but not a second is wasted. As Um and Park move toward their respective futures, Um invites the audience to consider the effects children and their parents have on one another, as well as the consequences of chasing the American dream.

Um plans to extend the scope of the short to a full-length documentary, which will be called “Liquor Store Dreams,” a title meant to encapsulate the contrast between immigrants’ lofty goals and the sometimes harsh realities that they live in. Unlike “Liquor Store Babies,” “Liquor Store Dreams” will follow a larger group of second generation Korean Americans who are also the children of liquor store owners, as they struggle to balance their passions with familial responsibilities. Just like in her short film, Um will put her own experiences on display alongside the stories of her peers.

To achieve this, Um is launching a Kickstarter on May 7, the same day the short film will be released to the public. To watch the trailer and check out more info about her project, check out Um’s website here. 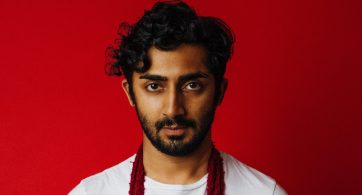 When actor Vineet Chhibber first began auditioning for roles, there was one time he was asked to make out with a camel. “They would tell me, ‘It’s just comedy; […]