Orange Is the New Black, Netflix’s trailblazing prison dramedy, which just released its second season, highlights a multiethnic cast, as well a variety of gender and sexual identities. However, despite all of the diversity in season one, the only Asian inmate was Chang (played by Lori Tan Chinn), a hilarious but rarely seen older woman with a thick accent. So when Brook Soso, played by biracial Japanese American actress Kimiko Glenn, dressed in prison orange, walked wide-eyed into Litchfield Prison, she turned heads on and off screen. Because this was one of the rare occurrences where a character in a mainstream show had their Asian identity explored in a non-stereotypical way.

Glenn, an Arizona native, began doing theater when she was 10 years old. Halfway through her first year at the Boston Conservatory, she was cast in the first national tour of Spring Awakening and subsequently moved to New York to continue to pursue theater, including originating a role in Julianne Moore’s Freckleface Strawberry.

Orange Is the New Black (OITNB) creator Jenji Kohan had caught Glenn’s performance in the musical adaptation of Love’s Labour’s Lost in Shakespeare in the Park and asked Glenn to perform a Meredith Brooks sing-along as one of her contributions to her first season on the show. “Singing is one of my stronger suits, so I think maybe that’s why it was written in,” says Glenn. “It’s nice that I got to sing. But I didn’t sing in my real-person- Kimiko voice; it was in my Brook voice.”

Although a self-described TV newcomer, Glenn holds her own with veterans like Kate Mulgrew and Taylor Schilling. With perfect comic timing, Glenn performs some of the funniest lines of the season: “You seem so calm. Are you a murderer?” she inquires with earnest, child-like sincerity. Glenn describes Brook as “a chatty social activist who wants to be loved and understood.” Indeed, her character, nicknamed “babbling Brook,” is so misunderstood and grating, that you don’t know whether you want to hug her or throttle her. Nonetheless, Glenn defends Brook, saying, “She makes points in ways that annoy people, but she’s often right. The conditions in the prison are terrible, and Brook brings that to light.” And it cannot be denied that, despite Brook’s seemingly flighty nature, she stands behind her convictions, be it a hunger strike or a refusal to shower, much to her fellow inmates’ chagrin.

No one is more conflicted about Brook than the show’s lead, Piper Chapman. Initially nurturing to Brook, Piper later turns on her. “Sometimes when you see yourself in someone, who you used to be, you reject it,” theorizes Glenn. “I think that’s part of what’s going on. Also, she’s irritated by Brook because the moment she gives me a little warmth, I latch onto her and she pushes me away.”

Glenn has a lot of fondness for Brook and begrudgingly admits that she relates to her character’s neo-hippie lifestyle. Glenn once went on a silent Vipassana meditation retreat and regularly oil pulls in the morning. But unlike Brook, Glenn says she is “not nearly as aggressively vocal. I’m pretty shy at heart. Not to say that I can’t be talkative, but I err on the side of caution before speaking my mind.”

Glenn describes the process of shooting for TV as “wildly different” from theater. “You do a scene for two hours and then you’re done with that scene. You can be on a run of a play for years and do that scene over and over. It was very strange to figure out how to memorize this, stay open, try new things, all in a few takes. It was a lot to adjust to.” But she did like one thing: “You can whisper.”

It was in the midst of binge-watching OITNB that Glenn, who is friends with Uzo Aduba (Crazy Eyes), received a casting notice. “I thought I was seeing things,” she laughs. “It was nine pages of sides, and I thought, ‘Oh god, I have to do really well, because it’s such a good show.'” The next day she auditioned, the following day she booked it, and the day after, she was on set at 6 a.m. to shoot her first sex scene ever with Natasha Lyonne.

Although comfortable with her body and the nudity required for the role, Glenn was concerned. Lyonne gave her pointers. “She told me it was technical and not sexual at all,” says Glenn. “At the end of the day, people want you to feel comfortable, do well and get out of there. She gave me some good advice.” Glenn also appreciated that “the producer, a woman, was very understanding and made it clear they wouldn’t make me do anything I’m not comfortable with. We agreed upon a mapped out scene and decided what it would be. It wasn’t as daunting or crazy as you might think.”

When she told her parents she was on the critically acclaimed and occasionally graphic show, her mother wrote on Facebook, “Kimi is doing this show. Excited but apprehensive, haha.” Glenn explains that her parents were “aware that it is a racy show. Either way, they are really proud of me.” And they have a lot to be proud of. Brook is also in season three, slated for release next summer, of the successful show, which to date has received 12 Primetime Emmy Award nominations and a Satellite Award for Best Cast in a Television Series.

The show’s unique blend of dark humor, dramatic heft, flashback structure and vivid characters sets it apart from any other show out there. Glenn remarks that the casting process for her role was ethnically unspecified. “The show’s creative team knew Brook’s characteristics, but in terms of looks, they were open. A lot of people auditioned who were all different colors, shapes and sizes, and then they landed on me.” Once Glenn was cast, Brook’s hapa identity was written into the script.

All too often, when Asians are represented in popular culture, they speak in broken English or are defined by common tropes such as geisha, ninja, opium dealer, manicurist and so on. On the other side of the spectrum, when we do see a hapa on film or TV, the actor often passes for white or their ethnic identity is never discussed. However, confusion over Brook’s Eurasian appearance is addressed in one of her first scenes. Brook is given a tribal welcome toothbrush by the overtly racist Morello, who usually reserves kindness for white inmates. “I don’t normally bend the rules like this, but you don’t look full Asian,” she says, looking Brook over.

OITNB‘s openness to casting is refreshing to Glenn, who has encountered her share of difficulties and discrimination in her many years auditioning. “There were times where I was told I wasn’t cast because they wanted a blond, to put it nicely,” she says. “It was disheartening as a kid to grow up knowing that. In the real world, there is room to cast more openly, but it’s still a big issue and something that I deal with on a daily basis. This show is a great example of colorblind casting. They cast who’s best for the part. The women on the show are not the kind of people you normally see in Hollywood. I think OITNB is opening people’s minds about what they want to see.”

Catch Kimiko Glenn in season two of Orange Is the New Black on Netflix.com. 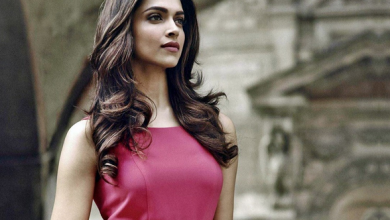 The beloved Bollywood actress Deepika Padukone was quite the topic of discussion this past weekend. Unfortunately, the attention was not because of her highly anticipated, English-language comedy Finding Fanny, which […]