A new play about to hit Broadway is going to make history.

“Straight White Men,” by Korean American playwright Young Jean Lee, is the first play by an Asian American woman to appear on Broadway.

The show, which just cast Armie Hammer and Tom Skerritt in its lead roles, is about three brothers who visit their widowed father for Christmas. The eldest brother deals with an existential crisis about fulfilling his potential and privilege.

When the play first debuted in 2014, the New York Times described it as “compassionate and stimulating.”

The Broadway debut of “Straight White Men” will begin in the summer and coincides with the 30th anniversary of the debut of David Henry Hwang’s “M. Butterfly,” the first Asian American play to be produced on Broadway in 1988. This show, which will begin previews on June 29, 2018, ahead of its July 23 opening, will also be the Broadway debut for Hammer. 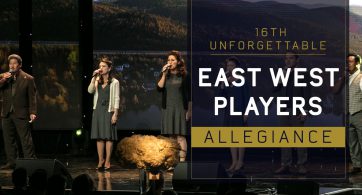 East West Players, the longest-running theater of color in the country, performed a medley from its upcoming musical production of “Allegiance,” which will run Feb. 21 to April 1 in […]