Recently, Blogilates founder and fitness instructor, Cassey Ho, released a short video about having “the perfect body.” However, what initially captured my attention was a photo of a much thinner Ho with an insane, Barbie-like thigh gap, thinner arms and a waist that looked like it was molded by a corset.

My initial reaction was far from praise. Instead, I questioned, “What in the world happened to her?” After following her and seeing so many of her well-known mirror selfies, there was no way this was the fitness guru I admired. Then I watched the video that followed and understood the unfortunate reality that this body type is what her fans seek to achieve.

And they’ve certainly let her know that she doesn’t actually have the “perfect body.”

I still question why a thigh gap is supposedly attractive to both men and women. If girls don’t naturally have it, they certainly want it and will work to get it. Realistically, everyone’s body type is different and even if you end up losing weight and toning up, you still won’t look like a carbon copy of the fitness model you were looking up to. Our body shapes our different, from the length of our legs, our torsos, to our arms and shoulders. Instead of striving to look like someone else, we should strive to be the best version of ourselves. Let’s be honest though, this is easier said than done, but let’s keep this in mind whenever your self-esteem is dipping down.

Ever since I began college, I struggled with my body image and weight fluctuations. I went from a thin, weak, curve-less teenager to the “thick” but physically stronger adult that I am now. Truthfully, I prefer the latter because looking back at old photos, I was so skinny that my head looked way too big for my body. Still, it’s a constant struggle to find a balance between a healthy and active lifestyle without being too strict on myself and not enjoying life.

If you’ve noticed, I refer to Cassey Ho and Blogilates quite a bit. She was the first to help me with easy recipes that are healthy so I won’t be lazy to cook. Her workout clothes are so motivational (and cute) that they made me want to get up and go to the gym and, most helpful of all, she has always been positive and upbeat. She isn’t a tough, intimidating instructor with glistening muscles popping out of the computer screen; she’s someone “real” with an imperfect, but strong body. I’m thankful she made the video because it relays a very powerful message about body shaming and body image.

Self esteem is such a powerful factor that can truly make or break anyone. Unfortunately, Ho is considered a “celebrity” and this type of publicity and bullying is often considered normal. And perhaps this comes with the territory of being well-known, but that isn’t an excuse for people to discourage her, or other people for the matter, who are trying to change and better themselves.

All images courtesy of Cassey Ho. 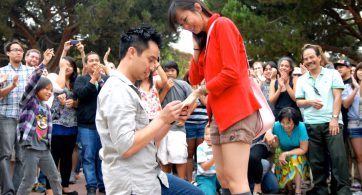 Nearly 10 years ago, my very first boyfriend asked me out by recording a message on a mix CD that instructed me to meet him on the school […]