There are few food terms that have turned more rancid than “fusion.” When fusion cuisine first gained currency in the 1980s, it was supposed to communicate a kind of inventive, worldly sophistication, where European fine-dining techniques embraced primarily Asian influences. In Los Angeles, the most prominent example was Wolfgang Puck’s Chinois on Main, opened in 1983, where the famed Austrian chef served everything from curried oysters with salmon roe to papaya with frozen Zinfandel to a signature Chinese chicken salad that popularized the dish nationally.

However, like most food fads, bad examples of fusion soon followed. In many cases, dishes felt simultaneously pretentious and lazy, as if chefs were just choosing items from Column A and then splicing them with something from Column B. Think wasabi mashed potatoes or duck confit egg rolls. As Night + Market’s Kris Yenbamroong writes in his restaurant’s self-titled cookbook, by the nadir of the trend in the 1980s, “the only chefs doing ‘Asian fusion’ were white guys who put lemongrass in their beurre blanc.”

As a result, by the end of the 1990s, fusion cuisine’s associations became unavoidably uncool. Today, it’s hard to find any chefs who openly embrace the term. Instead, you’ll hear them use less tainted codewords such as “mash-up” or “global,” but it’s still the same idea at heart: the blending of different food cultures. Fusion, as marketing-speak, may be passé, but the fusing of foodways is as omnipresent as ever, from hipster food trucks to Michelin-starred restaurants. Don’t call it a comeback, fusion has been here for years.

For thousands of years, forces such as trade, migration and imperialism moved people, ingredients and cooking practices into contact across continents. For example, the Scoville heat bombs in Indian cooking wouldn’t be possible if not for chili peppers that came to the subcontinent from Central and South America, via Portuguese traders. Likewise, poached-chicken rice may have originated on Hainan Island, but it was Singapore, 2,100 miles away, that eventually adopted it as a national dish.

Asian Pacific Islander American cuisine, especially, is a product of adaptation and blending. For example, when the first Chinese restaurants appeared in Gold Rush-era California, cooks didn’t have access to fresh, traditional ingredients, nor were waves of experienced Chinese chefs braving the boat journey across the Pacific. Instead, the dishes that emerged—think chop suey or chow mein—were an attempt at taking something with roots in Chinese cuisine and transforming them for local palates and supply chains.

Much the same might be said of today’s pad thai, General Tso’s chicken, California rolls and similar dishes that are ostensibly “Asian” in origin but far more American in their development. This is why debates around culinary authenticity ring so hollow. Few dishes have some kind of “pure” origin, untouched by the global movement of people and their food practices.

Fusion in food, including intentional “fusion food,” is neither an inherent good nor bad. The cross-cultural mixing of ingredients and techniques can create both delightful surprises and utter fails. To probe where that line gets crossed, I decided to invite a few friends to join me in an experiment.

I pulled out two older cookbooks, both by the prolific Ken Hom, who has penned over three dozen tomes about Asian/Chinese cooking. In 1987, he published “Ken Hom’s East Meets West Cuisine;” essentially a fusion cookbook before the term had caught on nationally. “East Meets West” applies French nouvelle techniques to Chinese classics, with resulting dishes like Asian Pear Watercress Soup and Provençale Rice Noodles. This book went to Leonard Shek, who was trained in New York restaurants and occasionally hosts a pop-up fried chicken stand, Gentry Chicken, here in L.A.

I took on last year’s “Chinese Heritage Cooking From My American Kitchen” by Shirley Chung, the two-time “Top Chef” finalist. It isn’t a fusion cookbook—Chung never uses the term—but it does include fusion-style dishes such as Baby Arugula Salad with Black Vinegar Dressing and, most famously, Cheeseburger Pot Stickers, which she debuted on “Top Chef” and serves at her new Culver City restaurant, Ms. Chi Cafe.

Chiao, Shek and I all prepared dishes from our books, and then we got together for a potluck and discussion. Coming into this experiment, Chiao and Shek had been skeptical about fusion cuisine. Chiao felt that, in the past, many dishes suffered from being “contrived in trying to orchestrate hybrid flavors and textures that haven’t been tested through time.” Shek’s misgivings were more around chefs he felt were either “appropriating” or “selling out” Asian cuisine “for a white audience,” but admitted that, these days, “our generation has come to reclaim [fusion] in our own way.”

The most fusion-y dish Shek made from Hom’s “East Meets West” was Scallion-Corn Soufflé. The soft egg in the soufflé, served with an accompanying tomato-ginger relish, was reminiscent of that Chinese American staple: scrambled egg with tomatoes. Hom doesn’t mention this connection. Perhaps it’s a coincidence, but being reminded of such a homey stir-fry within a technique-forward soufflé was playful and enjoyable. It’s probably not a dish I’d ever order in a restaurant, but that has more to do with my general disinterest in soufflés.

Chiao and I made similar dishes: Hom’s Braised East-West Oxtail Stew and Chung’s Rice Wine-Braised Lamb Shanks, respectively. In both cases, the fusion element came in the base ingredients. For Hom’s oxtail, he combined soy sauce, mirin and hoisin sauce (East) with tomatoes and orange zest (West). Likewise, for Chung’s lamb shanks, she paired a classic Italian soffritto—celery, carrot and onion—with equivalent Chinese aromatics—ginger, scallion and star anise. Both braises ended up tender and tasty, with a deep, umami goodness that subtly recalled Italian and Chinese dishes without being too on-the-nose.

A common thread that emerged during the dinner conversation was that good fusion “just makes sense,” which is to say: they don’t feel contrived, and the ingredients fit together logically based on flavors, textures, traditions, etc. All three of us thought of the same example of fusion-that-works: Roy Choi’s Kogi taco, which combines marinated galbi and chili-soy slaw within a griddled corn tortilla. As intentionally cross-cultural the dish is, when you bite into it, everything feels and tastes harmonious. The first time I tried it I found myself unintentionally nodding, as if to say, “yeah, this is exactly right.”

In contrast, my curiosity took me to Chung’s Ms. Chi Cafe to try that vaunted Cheeseburger Potsticker. Alas, instead of nods, the dish got head shakes from most at our table. The filling, which a friend described as a “greasy, bland meatball,” lacked the juicy richness of a good cheeseburger. As a dumpling, it was both too big to eat without a knife and the skin was too thick. The cheese crisp on top was more decorative than delicious, but we liked the accompanying bacon tomato jam (because, well, bacon). Unlike other dishes in Chung’s book, this one didn’t make sense to us.

Ironically, or maybe appropriately, the morning of the fusion cookoff, my wife, Sharon, was raiding the fridge to find stuff for breakfast. She found some leftover rice, but not enough to make a meal. Then I remembered I had made a pot of classic turkey stuffing a few nights before—Sharon loves Thanksgiving food—which was more than enough to combine with the rice. So, we figured, “Why not?” The resulting fried rice/stuffing worked surprisingly well, and it didn’t escape me that we had stumbled across an example of fusion cooking by happy accident. Similar dishes get created every day in countless kitchens. Love it or hate it, the act of fusion is still at the heart of how we cook; it always has been. Fusion is dead, long live fusion! 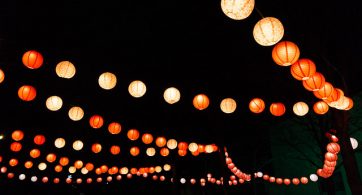 The month of September includes more than just the first day of school or Labor Day weekend. It’s also the month of the Mid-Autumn Festival (also known as the […]