Steve Ahn’s always been the kid in the corner doodling characters from “Dragonball” in his sketchbook. He was that kid in South Korea, where he was born, and where he fell in love with imported Japanese and American animation on television, and he was that kid in La Palma, Orange County, to which he and his family immigrated in 1996.

Eventually, he pursued art as a career. For more than a decade, Ahn worked with major studios like Nickelodeon and DreamWorks Animation TV to direct and storyboard projects like “Legend of Korra” and “Voltron: Legendary Defender.” Last year, he took a leap when he left DreamWorks to pursue creating his own mini-series, “Blossom Detective Holmes,” as an indie artist.

The show, which like so many creative projects has turned to crowd funding to cover production costs, can appear an odd medley of sorts, a crime mystery drawn anime-style that places London-born teenager Skylar Holmes and her partner Jaime in Stockholm to chase down criminals. Their dialogue is entirely Korean (English subtitles are included).

“The reason I wrote this thing in Korean is, I could have written it in English, hired a writer. But I just want to be myself,” Ahn said. “I wanted to bring all the things I love, things I like. I wanted to present who I am. That’s why I chose Korean, because it’s a better language for me. I can be more honest, I could write it myself. So I said, ‘Why not?’”

Back in Korea, he’d felt “burning” in his chest every time he watched animation. “In my heart, I thought, ‘I want to make that,’” he said. The ‘80s and ‘90s in South Korea were different times from the pop culture-touting country of today, especially for someone who wanted to make cartoons for a living. “Being an artist was hard to accept for any parent back then. I never knew or expected or wanted or dreamed that I could follow my heart. It wasn’t something imaginable like that. No one valued being a cartoonist.”

Ahn was 14 when he came to America. Once he realized he could turn his hobby into a real future, even disapproval from his immigrant parents couldn’t stop him from taking up character animation studies at CalArts in Valencia.

Later on, a 2012 trip to London sparked inspiration for “Blossom Detective Holmes,” triggering a series of writings and drawings upon his return to the states. The first idea he had was of a girl who’s a much younger version of the famous resident of 221B Baker Street. “I wanted to create not such a superhero but a teenage girl, and how she can bring life to justice and a goodness to this very dark, very heavy, intense crime mystery,” Ahn said.

Skylar Holmes and her partner Jaime — one with a keen sense of smell, and one who carries a teleportation device in the guise of a camera with her — are teenage sleuths inspired by Ahn’s two daughters. Their first case, titled “Selfie with a Strange Intruder,” involves a suspicious robbery, and promises to be the beginning of a darker series that explores the sides of murder.

For Ahn, taking on “Blossom” has meant everything from hours spent learning editing through YouTube videos to pushing the limits on what one animator can accomplish. “[Being independent] makes me feel like I’m an outlaw in a Western,” Ahn said. “I can go anywhere I want to go. No one stops me.”

“Steve had a story in mind that he wanted to tell about relationships,” said Saera Hwang, one of the series’ background painters. Hwang is one of a handful of animators from the industry’s top houses, hailing from Studio Ghibli to Nickelodeon, DreamWorks and Pixar, who have jumped on board to help Ahn. “It is brave of him to try a project like this.”

Ahn had wanted to work with Hwang for years on a project. When he approached her about “Blossom,” she didn’t hesitate to join his team. “It’s a special opportunity for artists, too, to be a part of these independent projects,” she said. “You feel invested, feel more responsibility. The results are rewarding.”

According to the series’ Kickstarter page, the vision “is to bring fresh ideas and content to audiences who are thirsty for a new kind of genre and story. … We want to expand the spectrum of content choices and reach out to fans and audiences who have been dying to see more mature animated content in the U.S. and around the world.”

Ahn drew the entire pilot episode himself to save on costs, an effort that took four months after pre-production. “It was rewarding, but it was suffering,” he joked. “I can’t waste my time pitching to networks, wasting three years to think that hopefully someday something will happen. It drags your life down.”

Part of his drive for “Blossom” comes from his experience working on two cult-favorite shows that helped push Japanese-style animation into the conversation of mainstream American pop culture. “Korra,” an offshoot from the kid-friendly animated series “Avatar: The Last Airbender,” is an exploration of young adult themes through animation that is rarely seen in America, while “Voltron” — which largely recruited the “Korra” team — has built up a sizable online following in a similar vein.

The two shows enjoy sizable online fan bases mostly comprising teenagers and younger adults. “I wanted to continue that [with ‘Blossom’],” Ahn said, “which is rare in the industry. It’s for a bit more mature audience.”

The Kickstarter for the series, which began a month ago, looks to raise funds for six episodes. So far, the bar’s up to $144,000, and is on the way toward being able to produce a fourth episode. 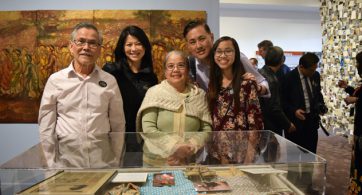 “This year in April we will have been here 43 years,” said Minh Ho of Garden Grove, California, as he and his family gathered around a glass display case […]