It goes without saying that we are all excited for ABC’s new sitcom Fresh Off The Boat. After all, it’s been two decades since we’ve seen a television series focus on an Asian American family.

While our readers generally agree with our excitement, there was one reaction that popped up more than anything else: what is with that title?

As you can imagine, many people were confused with the controversial title. “Fresh off the boat” has historically been a derogatory term and has been generally used as an insult. Many people have shared their fear that the sitcom will normalize the usage of “F.O.B.” without recognizing the oppression that comes along with the term.

Eddie Huang, the creator/writer of the Fresh Off The Boat memoir and the co-producer of the show, highly disagrees. The Taiwanese-Chinese American writer claims that he is turning the tables and hopes to create an environment where the phrase is a badge of honor.

“I would never call myself an American,” he told BuzzFeed. “I’m a Taiwanese-Chinese American. My parents came here in the late ’70s and had me about three years after they’d lived in this country. So I consider myself fresh. You can’t tell me to not consider myself something.”

“There are people in every race who try to speak for everybody and try to legislate what you can think and what you can’t think, with no understanding of what it means to interpret an experience,” he added. “It’s ‘fresh off the boat.’ That’s a term that Asians call each other and we claim it and it’s worn with pride.”

He went on to say that the title is a nod to how his family was perceived by others and how they perceived themselves.

Of course Huang recognizes that some may disagree with the title as well as the show’s portrayal of Asian Americans. He simply emphasizes that he is showing his own experience and it’s important for other Asian Americans to go and show their separate experience. After all, we are capable of having different stories.

“It’s not enough for one person to represent us,” he said. “We need many people. People are going to disagree, but, you know what? They gotta make another show.” 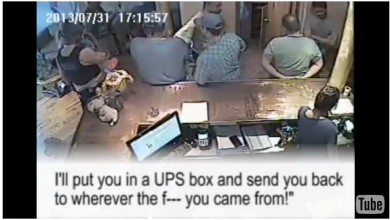 A lawsuit was filed in Chicago in 2013. Chicago police are accused of committing a hate crime for physically and verbally abusing an Asian American woman, Jianqing “Jessica” Klyzek, […]