Whether you were decked out in a body harness and chunky platforms at the Empire Polo Club, jamming out to your favorite artists or tucked comfortably in bed at home, trying to rid yourself of FOMO as you watched the official Coachella livestream on the festival’s YouTube channel, you may have noticed one fact—Asian musicians, from K-pop royalty to rising Thai rappers, took center stage.

Since Coachella’s creation in 1999, the music festival has exploded in popularity and size. As musicians like Beyoncé and Ariana Grande have headlined the event and fashion fans eagerly await to see the latest trends on celebrities and influencers, it has become a cultural event alongside a place to watch artists perform. But with the COVID-19 pandemic canceling the last two years of the fest, influencers, music-lovers and artists alike were eager to return to the well-known festival grounds in Indio, California. Coachella finally made its return on April 15–17 and April 22–24 of this year.

History was made even before the two-week festival began, as R&B artist Raveena became the first-ever Indian artist to perform at the event. Raveena was a part of the 2020 lineup but unfortunately could not perform due to the festival’s cancellation. Known for her inclusion of her South Asian heritage in her music, like in her latest album “Asha’s Awakening,” Raveena brought “Punjabi space princess” energy to her Coachella set, where she covered popular ’80s Bollywood song “Dum Maro Dum.”

No stranger to pioneering, 88rising became the first music label to curate and create a set in the festival’s 22-year run. On both weekends, 88rising fans were treated to an 80-minute set on Coachella’s main stage, filled with various Asian artists like Jackson Wang, BIBI and, surprisingly, Japanese pop icon Hikaru Utada, who performed for the first time ever in her career for a festival audience. Other artists like Rich Brian, Warren Hue, Yeek, Yoon MiRae and Dumbfoundead also came out to entertain the crowd, while fan favorites like Joji and NIKI performed their own individual sets throughout the festival. Thai rapper MILLI made headlines by eating mango sticky rice during her set, which led to the dessert trending on Twitter, and K-pop girl group Aespa took things to the “Next Level” on their first festival stage. But the biggest splash of the night—and possibly of the whole event—came during Korean solo artist CL’s set. Five years after her original girl group 2ne1 disbanded, all five band members reunited on stage for a fiery performance of their hit song “I Am the Best.”

Off-stage, Asian musicians, influencers and other festival-goers were able to hang at 88rising’s Cloud Mansion, an exclusive party pad. Attendees were treated to endless amounts of food, drinks and, of course, performances from 88rising artists like Luna Li, Hue and Yeek.

To get a peek at this year’s festival, check out our behind-the-scenes looks at the Cloud Mansion! 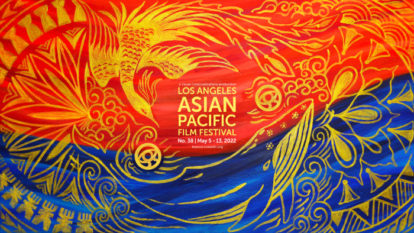 This year’s fest kicked off on May 5 and runs until this Friday, featuring a diverse program of features, documentaries, short films and much more.