The second season of AMC’s anthology series “The Terror” begins not with a bang, but a squelch. On Terminal Island, just off the coast of Southern California, a woman dressed in a formal kimono walks down a long dock, her neck bent at an unnatural angle as she forces her possessed body to sit. Then, she takes a pin from her hair and jams it into her ear canal until it pierces her brain. Cue the disgusting sound effect. After her perceived “suicide,” strange things begin stirring on the island. And it’s all up to Chester Nakayama to pick up the pieces. But somehow, even when he tries to run away from them, all of those pieces ghoulishly haunt him.

Derek Mio plays the ill-fated Nakayama on “The Terror: Infamy.” Developed by Max Borenstein and Alexander Woo and executive produced by “Blade Runner” legend Ridley Scott, Infamy follows the Japanese American community of Terminal Island as they’re afflicted by a chain of supernatural events that is somehow connected to their homeland of Japan. Even when they’re shuttled off to an internment camp, the spirit follows.

This isn’t Mio’s first time around the TV block—he’s appeared on shows like “SEAL Team” and “Spooked.” But this is his first lead role in a television series, and he’s waiting on pins and needles to see how this second season of the horror series will be received by audiences. “It was a lot of pressure,” Mio says. “I feel like I have such a strong connection to the character that I’m playing. It wasn’t just another acting role to me.”

Mio has real roots embedded in the era of Japanese internment. During the reconstruction of Japan after World War II, Mio’s maternal grandfather, who was proficient in Japanese, was sent to the country to monitor kabuki scripts for anti-American messages. In the process, he ended up befriending some of the country’s most famous kabuki actors. “He became an expert,” Mio says. “There’s testimony from actors saying that my grandfather was instrumental in preserving the art. Japan was war-torn and destitute at the time, so he often gave them cigarettes, liquor and food. I feel like this craft of mimicry and doing impressions was passed down from him.”

Then there’s Mio’s paternal grandfather, who actually grew up on Terminal Island, a small islet between the harbors of Long Beach and Los Angeles that was home to about 3,500 Issei and Nisei pre-World War II. But after Pearl Harbor, all of the adult, first-generation men on the island were forcibly incarcerated and sent to internment camps by the FBI—including Mio’s great-grandfather. “It’s crazy the connections I have with this project and my character,” Mio says. “There’s so many similarities. There’s a testimony online by my relatives saying how my grandfather was pleading with [the authorities] to take him instead of his dad. I really drew from learning about that. Chester is like a composite of both of my grandfathers wrapped up into one.”

For Woo, “Infamy”’s showrunner, finding people to work on the show who had deep personal connections, like Mio, was of the utmost importance. “Among our cast and crew, there’s 138 immediate relatives who were interned,” Woo says. “That’s a lot of people with a really deep, personal passion to the story. One thing that we’ve been told a lot by people who lived during the internment is that they wanted to make sure that this is not just a story of misery, but also a story of great strength and resilience, about people who persevered and survived. Having people that lived through it or have close relatives who did—that’s something that they could give us that a book just can’t.”

With “Infamy” being so serious in tone and subject, one might be surprised to learn that Mio harbors a much more light-hearted talent: He loves to perform stand-up comedy. He only started three years ago, but his YouTube channel is filled with videos of him doing impressions of political figures and pop culture icons like Wendy Williams, Keanu Reeves (Mio can do a wicked “Whoa”) and the commander-in-chief himself. One of Mio’s most well-known bits is his riff on how he used to wish he was Italian. “Any other Asian men wish they were Italian?” Mio asked at Hollywood’s Laugh Factory last year. “I grew up on “Goodfellas,” “The Godfather,” Pacino, De Niro. Very machismo guys. Who’d I have to look up to? Mr. f-ckin’ Miyagi!”

Although it might seem odd for a comedian to be breaking into drama, Mio doesn’t want to back himself into any corners careerwise. Plus, he doesn’t see horror and comedy as being that different from one another. They’re both about trying to get a rise out of the audience. “Comedy and horror are very similar in that they both rely on a set up and a payoff to build up suspense, like the set up for a joke with a punchline,” Mio says. “A lot of times Hollywood wants to put you in a box and only see you in a certain way, like you can only do one thing. But, I mean, a lot of the greatest actors started in comedy and went on to do drama.”

As for Woo and the show’s other shot callers, there was no hesitation when it came to hiring Mio despite his comedy background. And if you’re wondering if he cracked jokes on set, he did not. “I would have loved for him to tell a joke!” Woo says with a laugh. “He took the job very seriously. But there was never any doubt whether he could do it or not. He showed that he could. We read him many, many times. He proved that he was the choice.”Although this is his first lead role, Mio got his first taste of performing for an audience as a kid. He grew up in the surf city of Huntington Beach, in Orange County, a suburb known for its mild weather and big waves. He spent most of his free time playing basketball for the Japanese American league at his local Buddhist temple. In between practices, Mio would goof off with his friends and do impressions of their coaches. It was the only type of performance “training” that Mio ever got as a child.

“When I was young, I always imagined becoming an actor in the future,” Mio says. “I made my circle of friends laugh a lot, and that gave me some validation. One time, I gave a speech at our varsity basketball team banquet at the end of the year, and I did impressions of our coaching staff, and I killed it. I didn’t think I’d do this for a living, but I always felt like I wanted to. And then it happened.”

He’s the first in his family to break into Tinseltown, but he remembers watching shows like “Whose Line Is It Anyway?” and “Saturday Night Live” on weeknights with his mom, who would often do spot-on impressions of the celebrity performers. Growing up around the TV set instilled Mio with a certain love and awe for the Hollywood industry. When it came time to apply to colleges, there was no hesitation: Mio was going to study film at the University of Southern California.

After he graduated, Mio spent time picking up odd jobs modeling and doing commercials around L.A. when his aunt sent him a clipping from “Rafu Shimpo,” a Japanese American newspaper, about an open casting call. He nabbed his first film role in “Day of Independence,” a 2003 short that focuses on a young Japanese American baseball pitcher struggling with his identity during the era of Executive Order 9066.

He recently reconnected and met up with the director, Chris Tashima. “Day of Independence was really my start,” Mio says. “The movie ended up going to a festival, and that’s where I met my manager, who got me an agent. I went to Chris’ office, and he had the posters for the film and my uniform still there with my old headshot. It was a very emotional moment for me. It’s taken a while, but how great is it that this terrible story about our ancestors is finally getting told by a mainstream network?”

The significance of returning to the subject matter that launched his career and has now landed him his first major television role isn’t lost on Mio. He described the meeting with Tashima as a “full-circle moment.” “It truly felt like I had a responsibility to tell this story, and my ancestors’ story,” Mio says. “I was doing it for them. It felt like I had them supporting me the whole way. It’s gonna be hard to top this one.” Hopefully this will be a performance that will haunt Mio’s career. In a good way, of course. 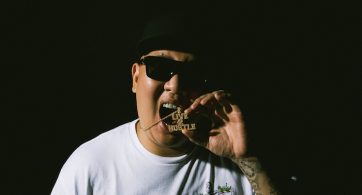 If you love sparkly things, then JimmyBoi’s Instagram Stories will make you drool. In one he holds two huge diamond-encrusted rings on his sausage-like fingers. “Oh yeah,” he says […]