Do you feel that? That hard blow to the gut is childhood hitting you and bringing back memories of after-school afternoons spent eating Fruit Gushers and watching your favorite Sailor Scouts kick butt while wearing short skirts and heels.

Due for release in May of this year, Premium Bandai has already sold out in their pre-orders but is planning on holding another pre-order event. Each pair is priced at 2,808 yen. The company has not yet confirmed whether they’ll be opening up purchases internationally.

The wands come in pairs and range in style, from Sailor Uranus & Sailor Neptune’s Lip Rods to Sailor Pluto’s Time Staff. You might be taking a math test or jotting down your grocery list, but at least in some way you’ll get to feel as if you’re fighting evil by moonlight. 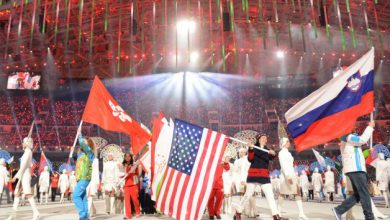 American ice hockey player Julie Chu was nominated and selected to represent Team U.S.A. as flag bearer for the Closing Ceremonies at the Sochi Olympic Games last night. The […]