Geraldine Viswanathan laughs when she talks about one of the most egregious instances of racial typecasting she has ever experienced. She doesn’t remember the name of this play in which she landed the lead role; just the part about not having to work very hard to “earn” it.

“It was about an assimilation camp in the early days of Australia,” she explains. (For context: these camps, like similar ones in the United States and Canada, sought to preserve white supremacy by ripping indigenous children from their lands, families and cultures. The fact that Viswanathan, the child of an Indian Tamil father and Swiss mother, is not indigenous apparently did not matter.)

“They made me play the indigenous girl because I was just, like, the closest thing they had to an indigenous-looking person,” she recalls with a chuckle. “It was truly insane. I wish I could time travel and watch this play because, basically, it was my [character’s] first day at the assimilation camp and all of the other white kids were like, ‘She’s dirty! Oh, she’s brown, clean her!’”

These experiences weren’t uncommon during her upbringing in the predominantly white city of Newcastle, about a hundred miles north of Sydney. But nearly a decade onward, the 23-year-old actress can laugh about it. These painful memories have become footnotes in her own ongoing story, one that exploded into the American mainstream with last year’s teen sex romp, “Blockers.” Her performance as Kayla, a laid-back girl who flippantly joins her best friends’ plans to lose their virginity on prom night, even with established co-stars like Leslie Mann, Ike Barinholtz and John Cena, who plays Kayla’s father.

She carries the same penchant for hilarious one-liners (“Let’s just say the chef went out to eat … my pussyyyy”) and disarming compassion into her first U.S. television role. “Miracle Workers,” which premieres on TBS February 12, places Viswanathan alongside another set of Hollywood heavyweights: Daniel Radcliffe and Steve Buscemi. She stars in the religious satire/workplace comedy as Eliza, a well-meaning angel (yes, literally) who accidentally convinces God—played by Buscemi, with a dishevelment and mid-life ambivalence befitting The Dude in “The Big Lebowski”—to obliterate Earth in the midst of his identity crisis. Scrambling to save humanity from God’s misguided wrath, Eliza teams up with Radcliffe’s Craig, another angel whose withdrawn tendencies counteract her optimism, to answer two awkward humans’ prayers for true love and to prove that this wretched blue orb is worth saving.

Viswanathan also flexes the dramatic talents she teased in “Blockers” for the title role in “Hala,” which just premiered at the Sundance Film Festival. She dons a hijab to portray a teenage girl balancing her growing attraction to a white classmate with her upbringing in a conservative Muslim household.

All of these projects, despite their wildly divergent premises, depict worlds in which intergenerational conflict empowers young people to find their own solutions to cultural problems their elders couldn’t fully resolve. That struggle rings familiar to many children of worldwide Asian diasporas, but not Viswanathan. Instead, she credits her family with supporting her early artistic development.

“My family is pretty creative, and we would always make little movies at home together,” she says. “My dad’s a doctor, but he loves film and technology. He always has the new gadgets. My mom loves acting and would do local theater. So I was lucky to have that. We’d make films when we went on family holidays.”

Viswanathan ultimately realized she could translate her creative pursuits into a career when she traveled to Los Angeles at age 15 for a teen acting workshop. “The American kids in the class were so outgoing and loud,” she says. “[The class] terrified me, but by the end of it, I found some confidence and got over the initial fear.”

She also met with someone “connected to managers” who, despite saying that she looked like half-Puerto Rican actress Victoria Justice (“You have eyebrows!”), affirmed that she “had potential.”

This exchange highlights a dynamic that many Asian Australian actors confront: that they, like their white compatriots, must seek opportunity in the United States. Viswanathan arrived at this realization years before projects like “Crazy Rich Asians,” which boasts Australia-born stars like Chris Pang and Remy Hii, opened them to a taste of the fame enjoyed by the likes of Cate Blanchett or Nicole Kidman. According to Charlotte Nicdao, an Aussie of Filipina descent who appeared in Syfy’s “Childhood’s End” had recently told the New York Times: “So many of us leave Australia to find work because it’s not here for us.”

Viswanathan agrees with this assessment, even as she believes that Hollywood’s tenuous embrace of diverse hiring has sent ripples across the Pacific. “Australia has a much smaller industry with much less money [than Hollywood], and it definitely has a way to go,” she says. “I think it’s catching up now. But it was always very clear to me, that if I wanted to pursue acting I had to come to the States. In Australia, even when I was auditioning at 15, my ethnicity always felt like a hindrance or something. There were just no roles, really, and I was definitely told in auditions that I couldn’t ‘play Australian,’ which was confusing to me because I have an Australian accent, grew up there and feel Australian. I just never felt like there was a space for me, which I’m hesitant to say, but it’s kind of the truth.”

The majority of Viswanathan’s interactions with Oz’s entertainment industry confirmed this understanding. After that class in Los Angeles, she graduated from Newcastle’s Hunter School for the Performing Arts, took a gap year (a common practice for high school graduates in several British Commonwealth countries) and moved to Sydney for university. She pursued courses in international studies and journalism for about a semester before dropping out to focus on the auditions that increasingly commanded her attention.

“It was a five year-long dual degree, and I thought I could maybe juggle both at the same time, but I ended up missing a ton of classes to go audition, and it was just not working,” she says. “I don’t think I even made it a full semester. I also just wasn’t enjoying it and kept thinking about how I wanted to do something else so bad.”

Pledging to “treat acting as if I was doing a degree,” Viswanathan gave herself three years to pursue her passion and return to school if it didn’t work out. Like many aspiring entertainers, she balanced audition after audition with various hospitality jobs. Her perseverance led to roles in domestic projects such as the acclaimed legal drama series “Janet King” and a morality satire, “EMO: The Musical” (based on an eponymous short that starred Nicdao in a lead role, which the feature film recast with a white actor).

Still frustrated by the creative satisfaction that evaded her, Viswanathan then turned to stand-up comedy, through which she joined the all-women comedy collective Freudian Nip. One stand-out video parodies the vapid social media influencer ecosystem and features Viswanathan exuberantly showcasing such enviable accessories as her “favorite designer rape whistle” and a full bottle of motor oil.

These pursuits allowed Viswanathan the space to hone the comedic chops she would soon employ in her first major U.S. role—one referenced in her biography on FreudianNip.com as a lead in “The Pact,” which would later become “Blockers.”

Viswanathan’s performance added emotional depth to the film’s refreshingly sex-positive take on girls and women’s romantic autonomy. Viewers see Kayla gradually replace her devil-may-care attitude towards virginity with a nuanced embrace of boundaries that don’t pander to her male partner’s gaze; later, she confronts her hyper-vigilant father with the understanding that not only can she set her own parameters for sex, but that she learned such strength from him. The actress gives all of these plot turns a contemporary sensibility that separates it from the misogynistic teen sex comedies of yore—and elevated her public profile in the process. “Blockers” similarly turned audiences’ eyes to Sarayu Rao (no relation), the Indian American actress whose portrayal of Kayla’s progressive-minded mother resists popular stereotypes of Desi mothers’ alleged sexual conservatism. Viswanathan says that she and Rao, representing different age groups and diasporic experiences, bonded over the relative liberation that their roles offered.

“We had many conversations about how we’re so excited to be part of this film, with a mixed-race family, how our characters are so not defined by our ethnicity, and how cool it was for me to play this sexually liberated young woman when Indians, or Asians, are so desexualized,” Viswanathan recounts. “Now, she’s the lead of a network sitcom, ‘I Feel Bad,’ which, for an Indian woman in her 40s, was never really a possibility before. Now it is, so it was really cool to talk to someone who’s been in this industry longer than me and witnessed this change. It makes me extra grateful for people who paved the way for newbies like me.”

As for “Miracle Workers,” her own pivot to U.S. television, she explains that “this season’s about us trying to answer these two prayers that these two really awkward, socially inept individuals made,” she says. “All of heaven’s a mess, and no department really functions well.”

The disorder looks a lot like the industry in which she has made her home. That said, Viswanathan recognizes the uniqueness of this moment for thespians of color, and hopes to keep up with comedy while expanding into dramatic roles and behind-the-scenes creative work, both in the U.S. and Australia. She carries a steadfast commitment to growth through all of the indignities and success she’s weathered, and refuses to give up that tenacity now that she’s tasted international success.

She says, “I’m open to everything and not compromising—setting a standard for things I feel strongly about and enjoy doing.” And not doing, like learning the ropes in a school that couldn’t see past her skin tone, referring to the horrific lesson of that indigenous girl casting taught her. “It was really quite traumatic at the time, because I was 14, and it was like, ‘Oh, this is what I have to do?’ It just felt so wrong.”

Now, it is Viswanathan who has the last laugh. 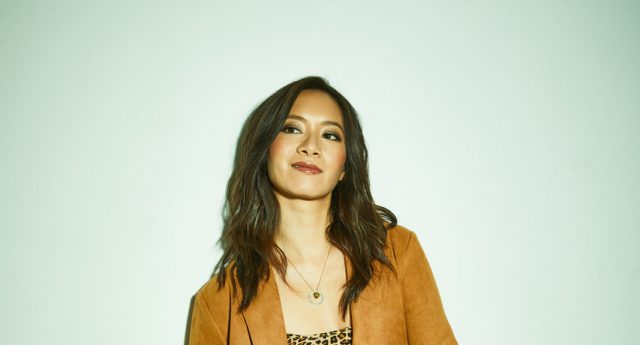 When Chantal Thuy went to see Tracy Letts’ Pulitzer Prize-winning “August: Osage County” in New York in 2009 as a drama student, she was electrified by the experience, especially the […]