CLAIM TO FAME: Diana Bang stars in the action-comedy film The Interview, starring James Franco as entertainment reporter Dave Skylark, and Seth Rogan as his producer, Aaron Rapoport. After finding out that North Korean dictator Kim Jong-un, played by Randall Park, is a huge fan of their show, the pair land an interview with the Supreme Leader. As they prepare for their journey to North Korea, the CIA intervenes and recruits the two to assassinate Kim. “Funny things are said. Hilarity ensues. Guffaws, chuckles, hee-haws,” says Bang, who plays the propaganda chief for Kim Jong-un and acts as Dave and Aaron’s tour guide in North Korea. As for her character? “She’s strong, kickass and loves her country.”

My go-to karaoke song: Any Little Mermaid song, but it’s a sad state of affairs if for some reason you’re listening to me sing.
The last time I cried: A few nights ago. I had a dream where I was super mad at someone while also needing to go to the bathroom really badly, but had to wait in line for over an hour.
What always makes me laugh: The unexpected.
My go-to comfort food: Cake. Cheese. Glico Curry. Soon tofu soup.
The last thing I ate: Poppyseed square. Serious deliciousness.
Current song on “repeat:” I’m a dunce when it comes to music. I kinda listen to whatever’s on the radio.
A guilty pleasure I don’t feel guilty about: Project Runway and the Food Network.
Current favorite place: In a forest on a mountain.
Drink of choice: Red wine. Fizzy water.
Current obsessions: Commuter cycling. It’s cheap, fast, easy and environmentally friendly. Plus, the helmet indent left on my forehead is highly fashionable.
Pet peeve: I don’t like it when my clothes or hair smell like food. Gotta be careful with the Korean barbecue restaurants.
Habit I need to break: Procrastination.
Hidden talent: I’m a mighty fine couch potato.
Talent I’d like to have: I wish I could sing and play the cello.
Word I most overuse: Sadly, I insert “like” into too many things I say.
Favorite hashtag: #cats.
Greatest fear: Being tickled to death by disembodied hands.
Motto: Be kind. Work hard. Have fun.
What’s cool about being Asian: Growing up in North America with an outsider’s perspective. THE FOOD. I’m on my way to ajumma-dom!
My job in another life: If I had the talent and skills, any one of the following: dancer, spy, musician, psychologist or scientist. 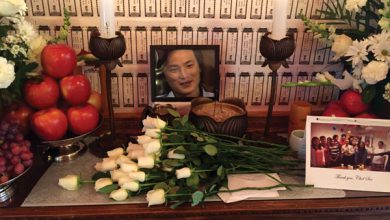 Pictured above: Mourners laid down these roses, as they paid their respects to Chol Soo Lee at a Dec. 9 memorial service at the Yeo Lai Sah Buddhist Temple […]